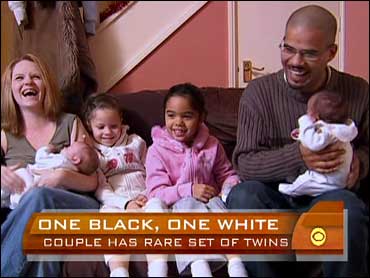 A British couple has defied the odds again by giving birth to a second set of black and white twin girls.

"I was as blown away as the rest of them, you know, there is no easy way to explain it all. I feel like I'm still in shock myself even though the first ones were seven years ago. It's amazing, but we just love them the same," says Dean Durrant, the father.

As CBS News correspondent Elizabeth Palmer reports, Alison Spooner and Durrant welcomed daughters Lauren and Hayleigh into the world seven years ago. Lauren takes after her white mother, while Hayleigh, takes after her father.

When the couple announced earlier this year that they were having another set of twins, they didn't think lightening would strike twice.

This time, baby Miya has her father's dark skin, while Leah looks like her mother.

Doctors say the phenomenon is so rare, that there are no statistics to illustrate the probability of it happening.

The twins were born premature last month and breathing problems kept them in a special care unit for a few weeks. But the family is all home now, looking forward to a happy health new year times two.