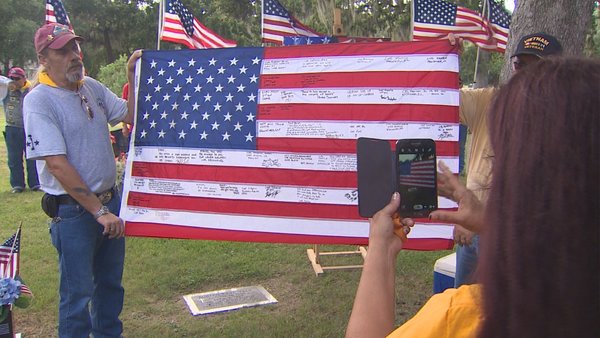 HUMBLE, Texas -- A couple who discovered a tribute flag for a fallen Marine at a Texas flea market presented it to his mother Saturday, more than nine years after he was killed in Iraq.

Lanie and Walter Brown gave the flag to Patsy Maciel before a small crowd gathered at the grave of Lance Cpl. Fred Maciel in the northern Houston suburb of Humble.

The Browns bought the flag for $5 after finding it tucked away earlier this month in the corner of a flea market in Hemphill, about 170 miles from Houston. The flag has about two dozen messages written by other Marines for Maciel, who was 20 when he died in a helicopter crash in Fallujah, Iraq, in 2005.

He was one of 31 American servicemen killed in the crash, which occurred during a sandstorm. It was among the single largest loss of American lives in Iraq and Afghanistan.

"We'll always remember the sacrifice you made," one message says. Another says, "Thank you for being who you were ... Rest in peace."

Walter Brown, whose own son is a Marine, said he knew he had to get it home, CBS affiliate KHOU reported.

"It's a lot deeper than just putting it in the mailbox and shipping it over. It had to be hand delivered," he said.

Patsy Maciel didn't know of the flag's existence until contacted by the Browns on Facebook. She had already received her son's belongings and an official flag to drape his coffin during funeral services.

"I got peace in my heart," she told KHOU after getting the flag. "You know I'm happy. This is all for my son. Nobody forgot my son."

Fred Yahne, the owner of the flea market, said he'd put the flag on one of the market's main counters in early July to look at it later. He believes the flag probably was among the contents of one of the many storage lot auctions his shop buys, according to the Chronicle. His wife sold it before he had a chance to examine it.

"I would want that if it was one of my sons," said Yahne, 52, explaining that two of his children served in the Army.

Maciel said her son was an athletic child who played basketball, football and baseball. He enlisted before he graduated, coming home from high school one day and telling his mom he'd joined in the Marines.

"His dream was to be a Marine, and I had to let him do that. I'm proud of him, that he died doing what he loved," she said.