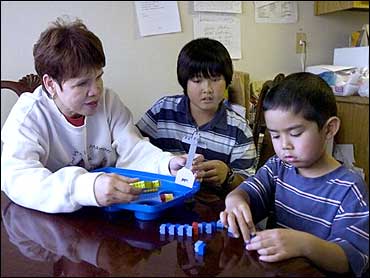 A married couple who got a dog sitter for their puppies but left the man's young children home alone while they vacationed in Las Vegas were arrested, police said.

Jacob Calero, 39, and Michelle De La Vega, 32, were taken into custody Wednesday as they arrived home on a flight to Oakland. They had left town Friday to celebrate the new year, authorities said.

The couple apparently told 9-year-old Joshua to look after his 5-year-brother, Jason, who is autistic. The children spent one night alone before police found them.

The parents said they couldn't find anyone to look after the boys,

Their grandmother, Libbey Holden, said she called police because she had suspected the couple left the children at home in San Ramon, about 35 miles east of San Francisco.

"I had big concerns," Holden told reporters. "These kids are helpless. (They), like any other kids, or any other human beings, deserve the love, time and affection of a parent."

The parents did leave their cell phone numbers, just in case the kids needed anything, says Blackstone.

"We made several attempts to contact the parents on both cell phone numbers we had available to us and that were provided to the children in case there was an emergency. Those calls went unanswered" until Tuesday, said San Ramon, Calif. police Sgt. Brian Kalinowski.

Holden told Blackstone that, when she heard of plans for the Vegas trip, she told the boys' new stepmother the children should go with them. But Holden quoted the stepmother as responding, "We are newlyweds, and we are working. We deserve a vacation."

Holden and her husband say they now want custody of the boys, Blackstone reports, but at a court hearing Thursday, she was ordered not to speak publicly about the case any longer.

The children's mother, Holden's daughter, died of cancer in 2003.

Joshua told The Associated Press his father and stepmother got each other puppies for Christmas, which they brought to De La Vega's mother to care for before leaving town.

"I thought they loved them more than us," Joshua said to the AP during an interview."

Police said they found the children asleep in their beds Saturday night, a day after being left alone. A gas fireplace was turned on, but they found nothing out of the ordinary.

"It appears that the food and the environment were set up for them to be alone," Kalinowski said.

The older boy said he was instructed to not answer the front door, so officers had to use a ladder to enter the home through an unlocked sliding glass door on a second-floor balcony.

Neighbors went to the house Saturday after hearing the younger boy screaming, "Help me! Help me!" in the family's garage, Kalinowski said. Finding no one home, they took him to their house and left a note behind. When Joshua returned after about an hour, he took his brother home.

Calero and De La Vega each were being held on suspicion of two felony counts each of child endangerment. Bail was set at $200,000.

Joshua, who said he was glad his father was arrested, explained that he and his brother ate cereal for breakfast and cooked frozen dinners in the microwave for other meals. He said his dad and stepmother left while they were asleep. They had asked him to watch his younger brother, but didn't tell him where they were staying, he said.

"They shouldn't leave us alone," Joshua said. "I didn't know who I could call in an emergency. Even if I called my father, he's far away, so there wouldn't be much he could do."

Holden said she tried calling Calero, but couldn't reach him. Worried, she consulted friends, and finally decided to call authorities.

"It seems to me that, as a parent, you would take a plane, train or automobile to come back to your kids as soon as possible," Kalinowski said. "We get the sense that they felt no urgency for them to return home."

They flew from Las Vegas early Wednesday and were arrested at Oakland International Airport about 11 a.m. Both have requested lawyers and have refused to talk to police, Kalinowski said. Felony child endangerment carries a maximum sentence of six years in prison.

Joshua said it wasn't the first time he and his brother were left home alone. Last fall, his dad and stepmother kept him out of school for a week so he could baby sit his brother while they went away.

Calero is a plumber and De La Vega works in a dental office, police said.

"So no one can ever ask that question again, about 'Are HBCUs relevant,' because she has shown that HBCUs are relevant," said Dr. Glenda Baskin Glover.