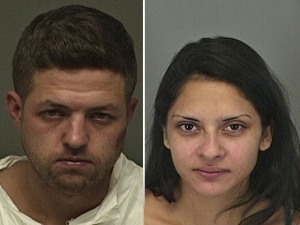 (CBS/KCNC) GOLDEN, Colo. - Police believe they've captured a couple who could be responsible for more than 20 robberies since August across the front range of Colorado's Rocky Mountains.

Police arrested Jacob Rocke, 26, and Carmen Lopez, 22, who is said to be Rocke's girlfriend. Both are accused of robbing two Starbucks coffee shops on Friday, Oct. 14, according to CBS affiliate KCNC.

Police say Rocke confessed to police that he robbed the two Starbucks and used a pellet gun.

Surveillance video showed one of the pair's suspected hotel robberies at a Marriott Hotel in Golden last month, KCNC reported.

According to an arrest affidavit obtained by the station, Lopez admitted to being in the car with Rocke while he robbed various pizza places and possibly some hotels. Police also claim to have linked Rocke to the other robberies by the clothes he wore and his brazen manner.

The duo is being held at the Jefferson County Detention Facility.