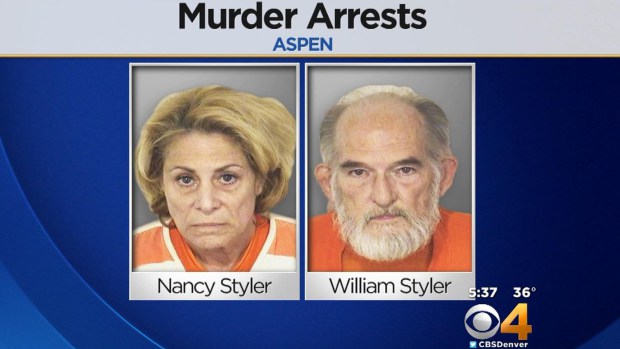 ASPEN, Colo. - A husband and wife who rented the house of a Colorado resort town socialite are accused of killing her and leaving her body in a closet after she returned home from an overseas vacation.

On Monday evening, authorities arrested William Styler III, 65, and Nancy Styler, 62, at the Aspenalt Lodge in Basalt, where they were staying after apparently moving out of Pfister's two-garage, two-story home Feb. 22. Both are charged with first-degree murder and are being held without bond, reports CBS affiliate KREX.

Pfister returned from a vacation in Australia on Feb. 22, and she was found dead four days later. A friend discovered her body in an upstairs closet at Pfister's home on the evening of Feb. 26. A cause of death has not yet been released.

Sheriff Joe DiSalvo said the investigation is ongoing, and he did not rule out the possibility of more arrests. The sheriff's office curbed public access in the courthouse and put up barricades to sequester scores of people interviewed in the past several days after Pfister's body was found.

DiSalvo said both suspects were questioned early in the investigation, but authorities lacked enough probable cause to arrest them. He declined to discuss the investigation further, and court records were sealed.

"This case has been hard from the beginning on all of us, because of the nature of it," DiSalvo said. "First-degree murders don't happen here too often."

DiSalvo said he knew Pfister and other members of her family.

Aspen is a posh ski resort town in the Rocky Mountains, about 100 miles southwest of Denver.