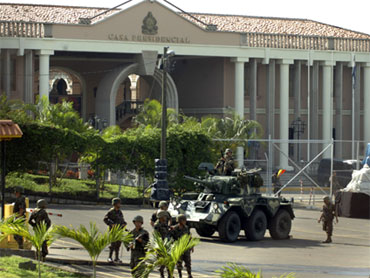 Honduras is now torn between two presidents: one legally recognized by world bodies after he was deposed and forced from the country by his own soldiers, and another supported by the Central American nation's congress, courts and military.

Presidents from around Latin America were gathering in Nicaragua for meetings Monday to resolve the first military overthrow of a Central American government in 16 years, and once again Venezuelan President Hugo Chavez took center stage, casting the dispute as a rebellion by the region's poor.

"If the oligarchies break the rules of the game as they have done, the people have the right to resistance and combat, and we are with them," Chavez said in the Nicaraguan capital, Managua.

There is a deep rift between the outside world — which is clamoring for the return of democratically elected, but largely unpopular and soon-to-leave-office President Manuel Zelaya — and congressionally designated successor Roberto Micheletti.

Micheletti rejected any outside interference and declared a two-night curfew, while Chavez vowed that "we will overthrow (Micheletti)."

Zelaya was seized by soldiers and hustled aboard a plane to Costa Rica early Sunday, just hours before a rogue referendum Zelaya had called in defiance of the courts and Congress, and which his opponents said was an attempt to remain in power after his term ends Jan. 27.

The Honduran constitution limits presidents to a single 4-year term, and Zelaya's opponents feared he would use the referendum results to try to run again, just as Chavez reformed his country's constitution to be able to seek re-election repeatedly.

Micheletti said the army acted on orders from the courts, and the ouster was carried out "to defend respect for the law and the principles of democracy." But he threatened to jail Zelaya and put him on trial if he returned. Micheletti also hit back at Chavez, saying "nobody, not Barack Obama and much less Hugo Chavez, has any right to threaten this country."

A plane carrying Rodas left Honduras late Sunday night for Mexico, where she was to be met by Mexican President Felipe Calderon.

The announcement was made by Nicaragua President Daniel Ortega, who said the information came from the Nicaraguan Embassy in Mexico. Ortega is chairing the meeting of Latin American presidents in Managua in support of Zelaya, who is also attending.

Earlier, Obama said in a statement he was "deeply concerned" about the events, and U.S. Secretary of State Hillary Clinton said Zelaya's arrest should be condemned.

"I call on all political and social actors in Honduras to respect democratic norms, the rule of law and the tenets of the Inter-American Democratic Charter," Obama's statement read.

For those conditions to be met, Zelaya must be returned to power, U.S. officials said.

The officials said the Obama administration in recent days had warned Honduran power players, including the armed forces, that the U.S. would not support a coup, but Honduran military leaders stopped taking their calls.

Zelaya said soldiers seized him in his pajamas at gunpoint in what he called a "coup" and a "kidnapping." The United Nations, the Organization of American States and governments throughout Latin America called for Zelaya to be allowed to resume office.

"I want to return to my country. I am president of Honduras," Zelaya said Sunday before traveling to Managua on one of Chavez's planes for regional meetings of Central American leaders and Chavez's leftist alliance of nations, known as ALBA.

Zelaya's call for civil disobedience and peaceful resistance appeared to gain only modest support in Honduras, where a few hundred people turned out at government buildings to jeer soldiers and chant "Traitors!"

Some of Zelaya's Cabinet members were detained by soldiers or police following his ouster, according to former government official Armando Sarmiento. And the rights group Freedom of Expression said leftist legislator Cesar Ham had died in a shootout with soldiers trying to detain him.

A Honduran Security Department spokesman said he had no information on Ham.

Armored military vehicles with machine guns rolled through the streets of the Honduran capital and soldiers seized the national palace, but no other incidents of violence were reported.

Sunday afternoon, Congress voted to accept what it said was Zelaya's letter of resignation, with even the president's former allies turning against him. Micheletti, who as leader of Congress is in line to fill any vacancy in the presidency, was sworn in to serve until Zelaya's term ends.

Micheletti belongs to Zelaya's Liberal Party, but opposed the president in the referendum.

Micheletti acknowledged that he had not spoken to any Latin American heads of state, but said, "I'm sure that 80 to 90 percent of the Honduran population is happy with what happened today."

The Organization of American States approved a resolution Sunday demanding "the immediate, safe and unconditional return of the constitutional president, Manuel Zelaya."

U.N. Secretary-General Ban Ki-moon condemned the coup and "urges the reinstatement of the democratically elected representatives of the country," said his spokeswoman, Michele Montas.

The Rio Group, which comprises 23 nations from the hemisphere, issued a statement condemning "the coup d'etat" and calling for Zelaya's "immediate and unconditional restoration to his duties."

And Taiwanese President Ma Ying-jeou canceled a planned visit to Honduras, one of just 23 countries that still recognize the self-governing island.

Coups were common in Central America for four decades reaching back to the 1950s, but Sunday's ouster was the first military power grab in Latin America since a brief, failed 2002 coup against Chavez. It was the first in Central America since military officials forced President Jorge Serrano of Guatemala to step down in 1993 after he tried to dissolve Congress and suspend the constitution.