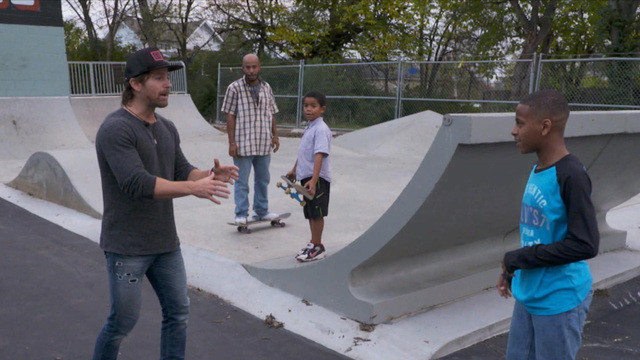 Singer-songwriter Kip Moore is known for his southern swagger. Now he's leading an unlikely partnership between country music and skateboarding.

In most parts of Nashville, Moore is a country star. But at a Nashville skate park, he is just someone who knows how to skateboard.

"Did you know who he was?" CBS News correspondent Jan Crawford asked a local kid named Davis.

"No, I didn't know his name. He was just teaching me," Davis responded.

"Had you ever heard of him?" Crawford asked another kid, Reggie, who shook his head no.

He's famous all right. His song "Somethin' 'Bout a Truck" went to the top of the charts and soon his shows were selling out.

But for all his success, this is where Moore feels at home.

"I came from -- you know, I didn't have much. But I saw kids that even had way less than me. And I've just always been inspired when I come into these communities to try to do something, and I look around and this is where my core is," he said.

He grew up in south Georgia where he got his start playing in bar bands. After college, he headed west to Hawaii where he fell in love with surfing and eventually skateboarding.

But he was always searching for his purpose. When he started making money in music, he knew where to put it.

"My thing was, 'What can I do to give these kids a safe place to go, give these kids some hope? Maybe turn 'em on to a new sport?' And skating was the first thing to kinda come to mind because of the community of it," he said.

A year ago Moore started partnering with local businesses to build skateparks in inner cities -- first in Nashville, then Annapolis, Boston, one in Texas and the newest opens next month in Cincinnati.

And the kids? They came.

"What do you feel like when you're out there skating" Crawford asked.

Will Anderson owns the skate shop next to Moore's park in Nashville.

"I'm guessing you don't hear a lot of country music in this neighborhood," Crawford said to him.

"No. When you think country music, you don't think the 'hood, you also don't think skateboarding. And so the fact that he is investing kind of both of those worlds in one ... I think that's pretty incredible," Anderson said.

"I've always felt like I've been a scrapper. And I feel like these kids are the scrappers. They're the ones that are fightin' and clawin' for every inch," Moore said.

For Moore, it makes perfect sense.