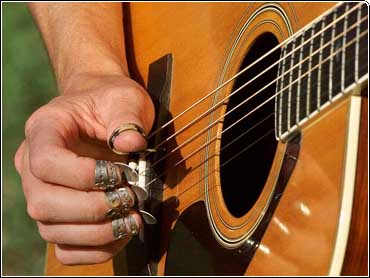 Hank Snow, whose gaudy rhinestone suits and million-selling hit song "I'm Movin' On" made him a country music legend for more than 40 years, died Monday. He was 85.

Snow, known as "the singing ranger" because of his flamboyant cowboy attire, was inducted into the Country Music Hall of Fame in 1979.

Snow's self-penned "I'm Movin' On" was No. 1 on the country music charts for almost a year in 1950. Other hits included "I Don't Hurt Anymore," "I've Been Everywhere," "Golden Rocket" and "Rhumba Boogie."

He recorded more than 40 songs that were in the top 10 of the country music charts and sold an estimated 70 million records. He made several concert tours overseas to perform for American troops, becoming one of country music's top ambassadors.

He was only in his 20s when he became a leading country performer in his native Canada. He was signed to a record contract in 1934, and his 45-year relationship with RCA, from then until 1979, was said to be a record.

He moved to the United States in the mid-1940s and began singing on the Grand Ole Opry regularly in 1950. His "I'm Movin' On," about boarding a train to leave a wayward lover, was recorded in 36 languages.

In the mid-1950s, Snow was a mentor to Elvis Presley just as Presley was breaking into the music business. He made concert tours with him. Presley would later cover "I'm Movin' On," as would Ray Charles and many others.

Snow sang for American troops in Korea, Vietnam, Germany, France, Norway, Italy, England and Japan. He said in a 1991 interview that his appearances for troops were the highlight of his career.

"This was a great experience, one that money couldn't buy. It was the most important part of my life as far as entertaining is concerned."

He continued singing regularly on the Grand Ole Opry into his 80s. In August 1996, when he returned to the Opry stage after a seven-months absence due to ill health, he got a standing ovation.

"We have always been one big family here," he told the audience. "Everybody on the Opry came up and said how glad they were to see me back."

He said in February 1992 that his career had been full.

"I've had about 140 albums released, and I've done everything I wanted to do."

In 1986, he was involved in a dispute with CBS-TV. He refused to appear on a TV special saluting the Opry because he felt slighted when asked to sing only one verse of "I'm Movin' On."

He was born in Liverpool, Nova Scotia, on May 9, 1914. Leaving home at age 12, he became a cabin boy on a freighter for four years. As a teen-ager, he used $30 in earnings from a tw-week stint unloading salt from a ship to buy his first guitar. His style was heavily influenced by the U.S. country singer Jimmie Rodgers.

In the mid-1970s, Snow became interested in fighting child abuse and disclosed that he had been abused by his stepfather. He organized benefit concerts and formed a foundation for the prevention of child abuse and neglect.

Snow once recalled a letter he received from a woman in England:

"It's really sort of morbid, but she said her mother wanted to see me all her life. And when she died, she made just one request: that a picture of me be put into her casket. So somewhere in England, I'm in a casket."