(CBS)
Kiribati was inhabited by a single Micronesian ethnic group that spoke the same Oceanic language for 2,000 years before coming into contact with Europeans.

The islands were first sighted by British and American ships in the late 18th and early 19th centuries.

The islands were named the Gilbert Islands in 1820 by a Russian admiral, Adam von Krusenstern, and French captain Louis Duperrey, after a British captain, Thomas Gilbert, who crossed the archipelago in 1788.

Kiritimati (Christmas Island) became a part of the colony in 1919 and the Phoenix Islands were added in 1937.

Tarawa Atoll and others of the Gilbert group were occupied by Japan during World War II.

Tarawa was the site of one of the bloodiest battles in U.S. Marine Corps history when Marines landed in Nov. 1943, the Battle of Tarawa was fought at Kiribati's former capital Betio on Tarawa Atoll.

The Gilbert Islands were granted self-rule by the UK in 1971 and complete independence in 1979 under the new name of Kiribati.

The U.S. relinquished all claims to the sparsely inhabited Phoenix and Line Island groups in a 1979 treaty of friendship with Kiribati. 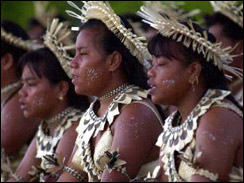 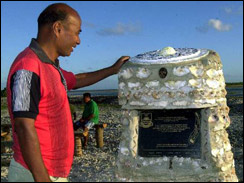 (AP)
A remote country of 33 scattered coral atolls, Kiribati has few natural resources. Commercially viable phosphate deposits were exhausted at the time of independence from the UK in 1979. Copra and fish now represent the bulk of production and exports. The economy has fluctuated widely in recent years. Economic development is constrained by a shortage of skilled workers, weak infrastructure, and remoteness from international markets. Tourism provides more than one-fifth of GDP. Private sector initiatives and a financial sector are in the early stages of development. Foreign financial aid from UK, Japan, Australia, New Zealand, and China equals more than 10% of GDP. Remittances from seamen on merchant ships abroad account for more than $5 million each year. Kiribati receives around $15 million annually for the government budget from an Australian trust fund.

A look back at one of the worst disasters in memory with facts, maps, photos and more.