(CBS)
The Gambia gained its independence from the UK in 1965.

Geographically surrounded by Senegal, it formed a short-lived federation of Senegambia between 1982 and 1989.

In 1991 the two nations signed a friendship and cooperation treaty, but tensions have flared up intermittently since then. Yahya A.J.J. Jammeh led a military coup in 1994 that overthrew the president and banned political activity.

A new constitution and presidential elections in 1996, followed by parliamentary balloting in 1997, completed a nominal return to civilian rule.

Jammeh has been elected president in all subsequent elections, including most recently in late 2006. 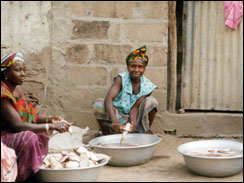 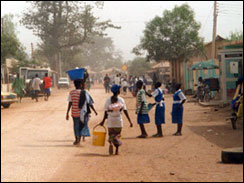 The Gambia has no confirmed mineral or natural resource deposits and has a limited agricultural base. About 75% of the population depends on crops and livestock for its livelihood. Small-scale manufacturing activity features the processing of peanuts, fish, and hides. Reexport trade normally constitutes a major segment of economic activity, but a 1999 government-imposed preshipment inspection plan, and instability of the Gambian dalasi (currency) have drawn some of the reexport trade away from The Gambia. The Gambia's natural beauty and proximity to Europe has made it one of the larger markets for tourism in West Africa. The government's 1998 seizure of the private peanut firm Alimenta eliminated the largest purchaser of Gambian groundnuts. Despite an announced program to begin privatizing key parastatals, no plans have been made public that would indicate that the government intends to follow through on its promises. Unemployment and underemployment rates remain extremely high; short-run economic progress depends on sustained bilateral and multilateral aid, on responsible government economic management, on continued technical assistance from the IMF and bilateral donors, and on expected growth in the construction sector.

AIDS: The Modern Pandemic
A history of AIDS, U.S. statistics, health facts and a look at how the epidemic has spread.