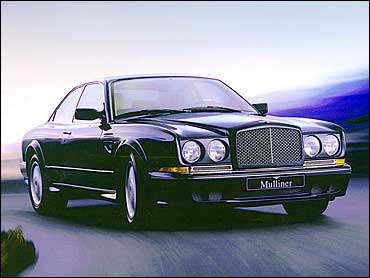 
My wife has taken to counting Bentleys. She spotted three of these $200,000-and-up money wagons two weekends ago and five more since. She's appalled. I am, too.

We have sermonized to our children against what we consider aggressive ostentation and wastefulness. And I have done the same to my readers, attempting to describe what I honestly believe is an historical anomaly — the current gap between the middle and the mega-rich, and the belligerent, unapologetic and decadent ways the mega-rich flaunt their treasure lately. I'm not saying this moment of financial gluttony is unique in history — just that it is now at one of the peaks of a long historical cycle.

These sermons, by the way, make for troublesome, no-win columns. Ostentation is very much in the eye of the beholder. One man's necessity is another woman's luxury. Most people, including me, think people who have a lot more have too much.

So invariably, e-mailers and comment makers will assault me from several angles, none of them wholly illegitimate. Some will say that I am just bitter, that as a journalist of the yuppie ilk, I am jealous of the investment bankers, hedge fund managers and entrepreneurs who can buy Bentleys on a whim. Others will accuse me of being over-privileged and showy for driving a wasteful Volvo. Some will see my observations as anti-capitalist, pinko drivel so typical of left-wing media bias. Others will call out my complaints as a timid and shallow rebuke of a trivial symptom of the great disease of American consumerism.

Forewarned, I would still like to "revise and extend my remarks," as they say in the Senate. Because in a very important way, I didn't know what really bugged me about grotesque displays of wealth until I had lunch with a close friend recently.

I'm not going to tell you my friend's name or the details of his story simply because it would embarrass him. He has been very, very successful in his work and is certainly among the wealthier people I know well. He recently scaled his work load way back so that he could enjoy his family and his life at a saner pace. He also has one great competitive passion that he can now indulge more.

At lunch, my friend was explaining this year's iteration of a rather convoluted scheme he concocted to subsidize the entry fees it takes to play his game at the highest levels. Basically, he has investors. If he wins the events he enters, he shares the profits with his investors; if he loses, they share the losses. He is a good investment.

But I can't conceive why my friend would want the hassle and pressure of investors. "Friend," I said to him, "why in the hell don't you just pay the entry fees yourself? You can afford it, no sweat."

There are two important ideas here. One, which I really had never put into words, was my friend's notion that how you spend your money and what you display to the world doesn't just send a message to the world about who you want to be, but also a message about how you want to treat people. Even more important, regardless of who got his message — regardless of whether it "mattered" in any concrete, worldly way — my friend made what he considered a respectful and moral decision about something that's not usually fodder in the moral debate.

It is easy to understand that someone who drives a flashy car, wears thousands and thousands of dollars of expensive jewelry and accessories, and lives in a giant mansion wants strangers to know at first glance that they are rich. It is more difficult to understand my friend's understated point that those same signals and symbols communicate disrespect or superiority to those with less, to some degree. Even if no actual individual receives that negative message, a statement is made.

My friend wasn't making a political statement. He wasn't condemning anyone or anything, and he wasn't trying to rack up points for political correctness (trust me on that).

In some societies at some points in time, showiness has been considered rude and even immoral. Material restraint is a dominant trait of the Puritanism that harnessed and steered American capitalism for so long. One might rightly argue that the Puritan industrialist may have been a great hypocrite, but there is something to be admired, too — something we have not done a good job of holding on to.

Manners are primarily a system of symbolic behaviors humans use to signal respect and consideration for other people, especially strangers. It now seems like an ancient and silly notion, but once upon a time things like what you wore communicated good or poor manners, not just wealth or its lack

There is obviously no objective demarcation of what is socially respectful consumption and what is disrespectful. That isn't the point at all. What is important, I believe, is that individuals at least consider the message they wish to send through things as seemingly superficial as cars, baubles and restaurant bills.

It may be a mark of macho American virtue not to care about what others thinks, but it is also disrespectful. We Americans are inclined to make a "statement" about ourselves with our consumer durables, our clothes, our tattoos, our cars and our "lifestyles"; it is important to realize that statements are not unilateral — there is a speaker and a listener. Respectful statements consider both.

My friend's other point, more inadvertent, is that clear and strong moral fiber is rarely generated individually. There is a great modern existential myth that authenticity comes from affirmatively choosing your own creeds and codes. But morality that sticks, respectfulness that endures, virtues that become habits are taught and are shared, usually in families, often through religions and sometimes in secular groups and communities. Confident, sincere and articulated choices, such as my friend's, are not made in moral isolation. They are taught.

So I think we should encourage my children to start counting Bentleys, while reminding them not too judge their drivers too harshly.