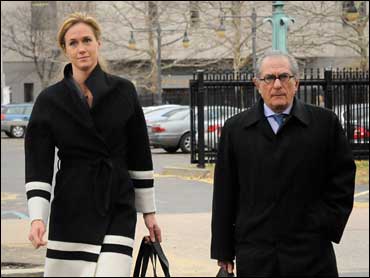 Even with divorce actions pending, United Technologies Corp. Chairman George David took his tall, blonde wife on extravagant vacations in Europe and the Caribbean and showered her with expensive jewelry from the fall of 2004 through the summer of 2005.

The 67-year-old David testified at his divorce trial Friday that the hundreds of thousands of dollars in spending was part of the couple's efforts to save their marriage.

But 36-year-old Swedish countess Marie Douglas-David's lawyers say it was all part of her husband's plan to get her to sign a post-nuptial agreement that would give her $43 million if they divorced. She's asking a Hartford family court judge to give her about $100 million, representing 30 percent of his assets.

David took the stand in a sharp navy blue suit on the third day of the trial, Tic Tac mints and water by his side, as Douglas-David's attorney questioned him about the couple's jet-setting lifestyle, sex life and his alleged surveillance of her.

Douglas-David has filed court papers showing she has more than $53,800 in weekly expenses, including funds for maintaining a Park Avenue apartment and three residences in Sweden. Her claimed weekly expenses also include $700 for limousine service, $4,500 for clothes, $1,000 for hair and skin treatments, $1,500 for restaurants and entertainment, and $8,000 for travel.

On The Early Show Saturday Edition, celebrity divorce lawyer Raoul Felder told substitute co-anchor and CBS News legal analyst Lisa Bloom, "The reason these cases exist is because it's the only case in the history of the world that, if you sue and lose, you're back with the deal you originally bargained for. You have nothing to lose. And you can smear the old man a little bit."

Asked whether the court will go along with Douglas-David's request for the near $54,000 in weekly expenses, he replied, "No. I don't think it's even going to get to that because, if the post-nuptial stands up, nothing else matters here, and the post-nuptial will stand up."

The couple married in 2002. David filed three previous divorce actions against his wife in 2004 and 2005 but didn't follow through with them.

While those divorce cases were pending, the couple vacationed in St. Thomas and Mustique in the Caribbean and traveled across Europe, including stays in Sweden, France and Switzerland, often flying on United Technologies aircraft.

David acknowledged Friday that the most lavish trip was a $200,000 yacht cruise along the coast of Italy in the Mediterranean, complete with $9,000 worth of caviar for the couple and some guests.

"It was an extravagant trip," David said, adding that the experience was a "privilege."

David said he and his wife at the time "were still trying to work out our extreme differences."

Douglas-David's lead lawyer, William Beslow (who represented Mia Farrow in her child-custody suit against actor-director Woody Allen and Marla Maples in her divorce from Donald Trump), kept asking David if he and his wife had sex during the vacations.

David answered several times that he couldn't recall exactly when the couple had sex, but he said they probably did on a number of occasions.

"I don't have recollections of sex," David said. "I just don't make mental records of it."

David also testified about hundreds of thousands of dollars in jewelry and accessories that he bought for his wife, including $255,000 diamond earrings in August 2005 and $48,000 in other jewelry in 2005.

Beslow also asked David whether he hired a private detective to follow Douglas-David while she was in Stockholm for at least two weeks in 2004. David said he didn't know if she was under surveillance, but Beslow pointed to prior deposition testimony in which David said he did hire someone to follow his wife.

David said outside the courtroom that he believed his wife was having an affair. He declined to say whether the surveillance produced any proof.

"I had reason to suspect that she was off the reservation early in the marriage," he told reporters.

David has acknowledged that he also had an affair during the marriage.

Douglas-David's lawyers have accused David of compiling "dossiers" on UTC employees before firing them, and that he was doing the same thing with his wife.

The trial has drawn only a few spectators and reporters to the small courtroom.

The 6-foot-plus Douglas-David wore large diamond stud earrings, a cream-colored sweater, a maroon scarf, a gray skirt and black stiletto heels Friday. She posed with her lawyers for photographers staking out the building.

Her lawyers claim that David preyed on her fears of being a single, childless woman when he got her to sign the post-nuptial agreement. They say he even served her with divorce papers in 2004 on the same day she was having a medical procedure for an abdominal condition.

Douglas-David acknowledged that she paid Beslow a $270,000 bonus a few months after the agreement was signed, and that she tried to have the deal enforced during previous divorce proceedings in New York that went unresolved.

After Friday's court session ended, Dranginis was asked about Douglas-David citing "intolerable cruelty" in the current divorce case, after the testimony about the high amount of spending.

"If this is intolerable cruelty, sign us up," Dranginis said.