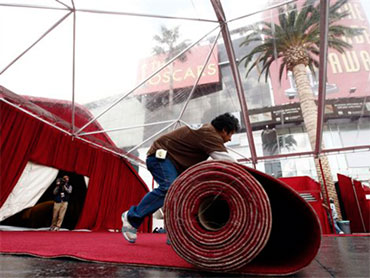 If the Academy Awards are like the Super Bowl of entertainment, then it's game week in Tinseltown.

There are cocktail parties in every corner of the city. Gift lounges have sprouted up like spring flowers. Calendars are crammed with dress fittings and shoe fittings and diamond fittings, not to mention countless lunches and dinners in honor of various nominees. Meanwhile, rehearsals are going on inside the Kodak Theatre.

All of Hollywood is gearing up for Sunday's big game - the Oscars. Here's the latest:

DRINKS WITH HISTORY: The week just started and the Oscar parties have already begun. Entertainment site TheWrap.com held its Oscar soiree Monday night at the Four Seasons, and Los Angeles Times' awards section The Envelope celebrated the season Tuesday with a cocktail party at the Hollywood Museum.

Costumes from Oscar-nominated films filled the exhibition cases inside the historic Max Factor building. There were the military uniforms from "The Hurt Locker," Sandra Bullock's dress from "The Blind Side" and the romulan pistol from "Star Trek." Also on display: Meryl Streep's costumes from "Julie & Julia" and Brad Pitt's Nazi-killing garb from "Inglourious Basterds."

The museum also holds such relics as Judy Garland's ruby slippers from "The Wizard of Oz" and the first Irving Thalberg award, presented at the 1937 Oscar ceremony.

Guests from the media, the actors union and nearby studios toasted Hollywood history as they geared up for the latest chapter at Sunday's 82nd Academy Awards.

HOLLYWOOD HALTED: Hollywood Boulevard - and its merchants - are martyrs for the Academy Awards.

The famous street shuts down for several blocks each year to accommodate Oscar's red carpet, fan bleachers and stages outside the Kodak Theatre.

Hollywood Boulevard is closed between Highland Avenue and Orange Drive until March 9. The subway stop at the Hollywood & Highland complex will also be closed beginning Saturday.