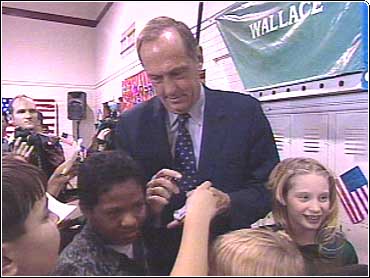 With the Iowa Caucuses just 11 days away, the news out here is that the front-runners are still out front -- way out front.

Iowa can be pretty bleak in January, reports CBS News Chief Washington Correspondent Bob Schieffer. The wind chill Thursday was 17 below zero, and it can even get chilly at the livestock auction. But there's a campaign headquarters on every corner and candidates say it's so important to get off to a good start that together they've logged an incredible 717 days here.

John McCain couldn't afford to compete here and is betting everything on the next contest in New Hampshire. That could mean a runaway win for Republican front-runner George W. Bush, who has a big campaign bankroll and one of the best-organized campaigns.

Although he's spent millions here, Steve Forbes never really caught on and trails far behind Bush in all polls.

On the Democratic side, Bill Bradley has outspent front-runner Al Gore five to one, but Gore sewed up labor support early and it's left him with a big lead in most polls.

"His organization permeates the state and is one of he strongest we've seen in some time," says caucus historian Hugh Winebrenner.

With the front-runners doing so well, everyone is trying to lower expectations.

For a fleeting moment Bradley's people thought he could win here, but listen to them now: "No challenger insurgent has ever gotten more than 31 percent," says Jim Farrell, Bradley's Iowa spokesman.

When McCain decided not to compete here, lawyer Joan Bolin tried, just for fun, to keep the effort going. It's been lonely.

"I haven't seen another McCain sticker in Iowa," she says.

But even though her man has no chance, Bolin's playing down expectations too.

"It's going to be hard for him to do well because he doesn't have support to get people to the caucuses," she says.

So don't expect any surprises here. Front-runners Bush and Gore will probably stay out front. But we could see history if all these lowball predictions come true: it could be the first time ever the total votes add up to less than 100 percent.