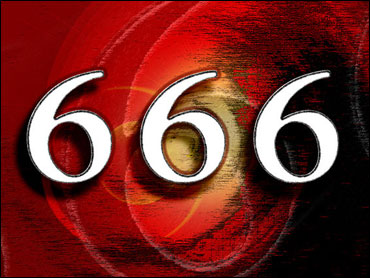 Is Tuesday just another day on the calendar or is there an ominous forboding when you put the month/day and year together?

Some believe 666 is the number of the Antichrist, reports CBS News correspondent Mika Brzezinski on The Early Show. It is referred to in the Bible as "the beast." From Revelation 13:18 in the Bible: "This calls for wisdom: let him who has understanding reckon the number of the beast, for it is a human number, its number is six hundred and sixty-six."

Something about the number 666 brings out the worry, the hope and even the humor in people, said the Rev. Felix Just, a professor of theology at the University of San Francisco. A Jesuit priest, Just has taught both apocalyptic theory and mathematics and maintains a "666-Numbers of the Beast" Web site that contains history, theology, math and precisely 66 one-line jokes about 666.

You can even make sport of it, betting online whether the apocalypse will happen on that date. The good news is that one online oddsmaker has made the world a 100,000-to-1 favorite to survive Tuesday — something that Just said is supported by theology.

"Many people avoid the number; they're afraid of it almost and there's absolutely no reason to be afraid of it," Just said. "It is not a prediction of future events. It is not supposed to be taken as a timetable for when the world is going to end."

Among those avoiding the date were Rachel Phillips, due to deliver her baby on June 6. Instead, she had her caesarean on June 1.

"I'm a superstitious person, for sure," she told Brzezinski.

Rachel Phillips isn't alone, says Prof. Phillips Stevens, who teaches anthropology at the University at Buffalo and is an expert in religion and superstition.

"On the scale of one to 10, I would give this 11. This is indeed very serious. It's a strong taboo, even stronger than Friday the 13th, which is also of Christian origin," Stevens told CBS Radio News.

A Dutch religious group organized a nationwide 24-hour prayer marathon Tuesday, fearing that the date will lend power to the forces of evil.

But spokesman Jan Piet of the Ambassadors Ministries said his group isn't particularly fascinated by numerology or worried that the anti-Christ will arrive on earth Tuesday.

"I don't think the devil has much more to do today than on any other day of the year. He causes discord and celebrates some victory just about every day," Piet said.

But Tuesday "is an unusual day" because of the date, he said.

"It's a day where a lot of people, groups may use to accomplish everything that has to do with evil and the devil. What we want to do is set down a large amount of Christian prayer as a kind of counterweight," he said.

On the other hand, marketers are embracing the superstition. A remake of the 1976 film "The Omen," in which the devil's child Damion was marked with the number, is being released Tuesday.

And Anne Coulter is releasing a new book, titled "Godless: The Church of Liberalism."

"It's my little tribute to liberals having it come out on 666," she said.

"I think right now it is one big, huge marketing ploy," the Syracuse University professor told CBS News. "However, I've got to say, I'm still, as a perfectly rational person, not comfortable when this number comes up. If my license plates showed up in the mail and it was three letters and the number 666, it still gives us the creeps."

It's a number that Nancy and Ronald Reagan didn't want as an address when they moved out of the White House in 1989 to the Los Angeles neighborhood of Bel-Air. So they changed their address from 666 St. Cloud Road to 668.

"People are afraid of it. What we are doing is capitalizing on their irrationality to mock it and point it out," said Magus Peter Gilmour of the Church of Satan, which is holding a high mass at a Hollywood theater Tuesday.

"We think it's quaint that people are afraid of that number, and since we are iconoclasts we are happy to embrace that to show people there is nothing to be afraid of," Gilmour said.

While the fear of 666 is Christian, "these kinds of beliefs are universal. For a person of one faith to say that we have these magical numbers, these dangerous numbers, that kind of information will find parallels other faiths," said Stevens.

It's a number that is part of every UPC barcode on groceries (a coincidence according to the code's inventor). With biblical coding, 666 also is the number for the WWW of the World Wide Web.

Many scholars, such as Just, say the beast is really a coded reference — using Hebrew letters for numbers — for the despotic Roman emperor Nero and 616 appears instead of 666 in some ancient manuscripts. The Book of Revelation isn't prophesying a specific end of times but "is about the overall cosmic struggle of good versus evil," Just said.

But for some more apocalyptic theologians, the end of times is coming, even if not specifically on Tuesday. The evangelical Raptureready.com Web site puts its "rapture index" at 156, calling that "fasten your seatbelts" time.

It's not the date June 6 that's worrisome, but the signs in our society of the approach of the 666 antichrist, said the Rev. Tim LaHaye, founder of a self-named ministry and co-author of the best-selling "Left Behind" series of apocalyptic novels. And even though LaHaye said Tuesday isn't the date of the apocalypse, his Left Behind Web site promotes his new book "The Rapture" with an ominous "06.06.06 Will You Be Ready."

"I don't think that people understand that 666 is not a good time," LaHaye said. He said he sees signs of an upcoming "tribulation period" that leads to the Antichrist's arrival in a movement toward one-world government, a single economic system and single religion.