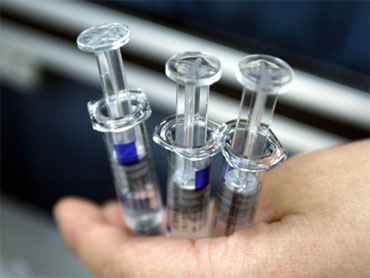 It was the first time researchers had time compared vaccinated animals with unvaccinated controls. Researchers vaccinated 13 newborn rhesus macaque monkeys with Hepatitis B vaccine containing a standardized amount of thimerosal - a vaccine preservative thought by some to cause developmental issues. The thimerosal dose matched that given to human babies until the early 2000s. Four monkeys received a saline placebo and three more had no shots at all.

The study found the unvaccinated animals developed normally, while the vaccinated monkeys demonstrated the survival reflex delays. According to one of the lead investigators, Dr. Laura Hewitson of the University of Pittsburgh, "Infants of lower birth weight and gestational age were at greater risk."

The study, published last week in the scientific journal NeuroToxicology, was not designed to determine whether it was the thimerosal or another component of the vaccine that caused the observed delays.

"We undertook these experiments largely because we were unable to find any safety studies comparing vaccinated and unvaccinated animals," said another study author, Dr. Andrew Wakefield of Thoughtful House, which provides resources for children with developmental disorders.

Watch: Part one of Attkisson's interview with Dr. Wakefield

Research conducted by Wakefield and his colleagues on a small group of autistic children in 1998 in Great Britain unleashed a firestorm of controversy. The findings were published in the British Journal Lancet. Based on the research, Wakefield recommended that studies be conducted on the safety of administering the three MMR vaccines (measles, mumps and rubella) in one jab. Until such research was done, Wakefield recommended children get the vaccines as three separate shots.

The study became the centerpiece for an ongoing and nasty fight between vaccine safety advocates who embrace Wakefield's research and believe vaccines can be administered in a safer fashion, and public health and government officials who attack Wakefield and believe his ideas threaten international vaccination programs.

Though the FDA and American Academy of Pediatrics have said thimerosal is safe in the doses it has been used in childhood vaccines, in 1999 they recommended that it be removed from vaccines as soon as possible. They said they made that recommendation out of an abundance of caution and because some parents and health professionals disagreed that thimerosal is safe for use in childhood vaccines. Despite that recommendation for removal in 1999, thimerosal remains in most flu shots, and is found in recently-licensed Novel H1N1 (swine flu) vaccines. Smaller amounts of thimerosal also remains in some other vaccines, even those marketed as "preservative-free."

According to the CDC:

"All Hepatitis B vaccines for the U.S., including for adults, are now available only as thimerosal-free or thimerosal-reduced containing formulations… The term "preservative-free" indicates that no preservative is used in the vaccine; however, traces used during the manufacturing process may be present in the final formulation. For example, some vaccines may be preservative-free but may contain traces of thimerosal (1 micrograms mercury or less per dose); in such settings, this information is noted in the package insert. Similarly, the term "thimerosal-reduced" usually indicates that thimerosal is not added as a vaccine preservative, but trace amounts (1 micrograms mercury per dose or less) may remain from use in the manufacturing process."

The government tracks the number of injury and death claims filed in the special vaccine court regarding HepB and other vaccines. While most vaccine injuries are never brought to the little-known court, it is still interesting to read about those that are. Click here and scroll down for claims filed, compensated or dismissed: by vaccine type.