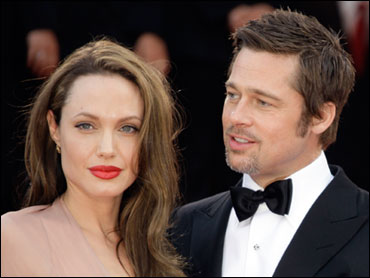 NEW YORK (CBS) The super-couple known as "Brangelina" may give a super-heroes surprise to fans at this year's Comic-Con convention.

Reports suggest that the A-list film couple could make "surprise guest appearances" at the annual convention for comic, fantasy and film buffs held in San Diego.

According to E! Online, the pair may be on hand at the four-day event to promote their newest films. Both Angelina Jolie's "Salt" and Brad Pitt's "Megamind" are expected to be presented on July 22.

While Pitt, 46, and Jolie, 35, are currently unconfirmed to attend the panels, the report notes that surprise guests have been known to drop in on unsuspecting Comic-Con attendees in the past. Last year, Johnny Depp dropped by to greet attendees during Disney's "Alice in Wonderland" panel. In 2008, Hugh Jackman surprised fans in support of "Wolverine."

Fans of the "Twilight" series were treated to a special "Robsten" super-coupling at 2009's Comic-Con when both Robert Pattinson and Kristen Stewart made guest appearances.

Confirmed guests at the convention include Will Ferrell, Bruce Willis and Helen Mirren. Hotly anticipated films up for presentation this year - alongside Pitt and Jolie's projects -- are "Scott Pilgrim vs. the World"; "The Expendables"; and December's "Tron: Legacy."