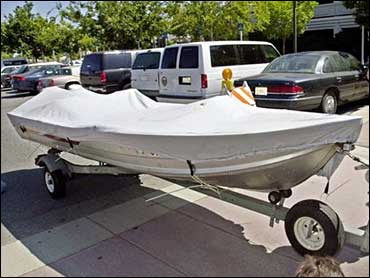 After taking a brief field trip to inspect Scott Peterson's fishing boat, jurors in his murder trial were told Tuesday that the small aluminum vessel does not capsize easily.

Prosecutors apparently want to establish that, contrary to defense claims, Peterson could have heaved his pregnant wife's 153-pound body overboard into San Francisco Bay without the boat capsizing. Peterson bought the boat just weeks before his eight-month-pregnant wife, Laci, was reported missing.

"Is this boat easy to capsize?" asked prosecutor Dave Harris.

"It's not been my experience," responded David Weber, vice president of engineering for Missouri-based Lowe Boats.

On cross-examination, however, defense lawyer Mark Geragos pointed out all buoyancy tests were performed while the boat was partially full of water, making it more stable.

Weber also acknowledged side stability tests were performed by placing 145 pounds evenly along the boat's inner side, not concentrating the weight in a way that might make it more likely to capsize.

"You ever try to put 400 pounds in one area?" Geragos asked in an apparent reference to the combined weight of Scott and Laci Peterson — whose body prosecutors allege was laden with as much as 40 pounds of concrete to ensure it sank.

Weber also said no tests were performed in choppy conditions similar to those on San Francisco Bay the day Laci Peterson vanished — Dec. 24, 2002.

"And you haven't done any of these tests in saltwater?" Geragos asked.

The prosecutor pointed out salt water is more buoyant than fresh water, making it less likely for the boat to capsize.

Prosecutors allege Peterson killed his wife in their Modesto home, drove to the bay with the body in a tool box, ferried it onto the open water and dumped it.

The remains of Laci Peterson and the couple's fetus washed ashore about two miles from the marina where Peterson set off on what he claims was a solo fishing trip.

Peterson, 31, could face the death penalty or life without parole if convicted.

Court will not be in session Wednesday while Geragos attends a hearing in an unrelated case. Jurors also will not be present Thursday when Geragos argues for a dismissal of charges or a mistrial based on allegations that a detective lied on the stand.