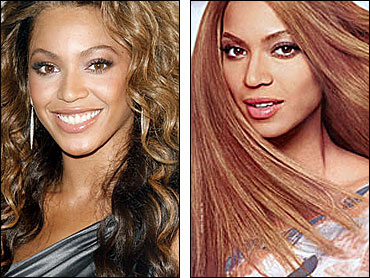 "We highly value our relationship with Ms. Knowles. It is categorically untrue that L'Oreal Paris altered Ms. Knowles' features or skin tone in the campaign for Feria hair color," the Paris-based company said in a statement sent to the Associated Press Thursday.

The ad is in the September issues of Elle, Allure and Essence on stands now.

L'Oreal, the maker of Garnier hair care and Lancome cosmetics, is the world's largest cosmetics maker.

A representative for Beyonce said the singer would have no comment beyond L'Oreal's statement.

In the two-page L'Oreal ad, Beyonce's wind-swept hair is a reddish blond shade with highlights. A box of Feria in the ad features a white woman with a similar hair color.

The ad created a stir after it was pointed out Wednesday by celebrity gossip Web site TMZ, which is owned by Time Warner Inc.'s AOL unit.

TMZ's post showed side-by-side photos comparing the ad with a photo of Beyonce with noticeably darker skin and hair. It was the site's most commented on post Thursday afternoon.

Beyonce's lighter appearance in the L'Oreal ad may just be the result of creative touchups or lighting to balance her highlighted hair, said Cynthia Park, president of K&L Advertising, a multicultural advertising firm based in New York City.

Still, she said companies need to be particularly careful when playing with the images of ethnic minorities in ads.

"Or you end up falling victim to these types of situations," Park said.

Beyonce has been a spokeswoman for L'Oreal since 2001. Other spokeswomen for L'Oreal include Scarlett Johansson, Milla Jovovich, Eva Longoria Parker and Kerry Washington.

A representative for Elle said magazine ads are reviewed before they are printed, but wasn't sure of the exact procedure for checking content. Representatives for Essence and Allure magazines were not immediately available for comment.