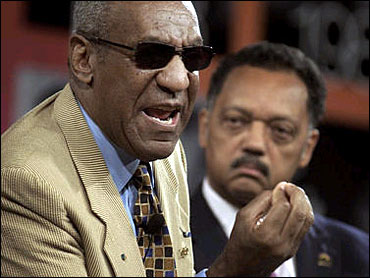 Bill Cosby is not backing down.

The entertainer, who has long been proud of both his show biz achievements and his doctorate in education, is again urging the black community to do a better job helping themselves and their children.

Speaking in Chicago Thursday, Cosby told room full of activists that black children are running around not knowing how to read or write and "going nowhere."

He also had harsh words for struggling black men, telling them: "Stop beating up your women because you can't find a job."

Rev. Jesse Jackson, founder and president of the education fund, stood side by side with Cosby and defended his statements.

Cosby made headlines in May when he upbraided some poor blacks for their grammar and accused them of squandering opportunities the civil rights movement gave them. He shot back Thursday, saying his detractors were trying in vain to hide the black community's "dirty laundry."

"Let me tell you something, your dirty laundry gets out of school at 2:30 every day, it's cursing and calling each other n------ as they're walking up and down the street," Cosby said Thursday.

"They think they're hip," the entertainer said. "They can't read; they can't write. They're laughing and giggling, and they're going nowhere."

He was clearly picking up where he left off on May 17th, when he addressed a Constitution Hall ceremony in Washington, D.C., celebrating the 50th anniversary of the Supreme Court's Brown v. Board of Education desegregation decision. Cosby at that time denounced some blacks' grammar and said those who commit crimes and wind up behind bars "are not political prisoners."

"I can't even talk the way these people talk, 'Why you ain't,' 'Where you is' ... and I blamed the kid until I heard the mother talk," Cosby told the dignitaries at the Washington ceremony, including NAACP President Kweisi Mfume. "And then I heard the father talk ... Everybody knows it's important to speak English except these knuckleheads. You can't be a doctor with that kind of crap coming out of your mouth."

Speaking at the Rainbow/PUSH event Thursday, Cosby's comments were several times interrupted by applause. He castigated some blacks, saying that they cannot simply blame whites for problems such as teen pregnancy and high school dropout rates.

"For me there is a time ... when we have to turn the mirror around," he said. "Because for me it is almost analgesic to talk about what the white man is doing against us. And it keeps a person frozen in their seat, it keeps you frozen in your hole you're sitting in."

Cosby lamented that the racial slurs once used by those who lynched blacks are now a favorite expression of black children. And he blamed parents.

He also condemned black men who missed out on opportunities and are now angry about their lives.

"You've got to stop beating up your women because you can't find a job, because you didn't want to get an education and now you're (earning) minimum wage," Cosby said. "You should have thought more of yourself when you were in high school, when you had an opportunity."

Cosby's own high school years were interrupted, when he joined the Navy after the tenth grade. But the future standup comedian, film and television actor and producer never stopped pursuing education.

He got his high school diploma through a correspondence course, followed up with a scholarship to Temple University and, despite already having achieved success in show biz, went on to study education and earn his master's degree at the University of Massachusetts.

Cosby, who turns 67 this month, was the first black ever to win an Emmy, and has shattered many color barriers in his career - including barriers of perception: images of successful black men, women and children doing and saying things that had never before been depicted in mainstream media.

In Chicago Thursday, Cosby called on the black community to do more to remember and honor the sacrifices made by those who struggled and died during the civil rights movement.

Cosby also said he is not worried by those who argue that some whites might take his comments and turn them "against our people."