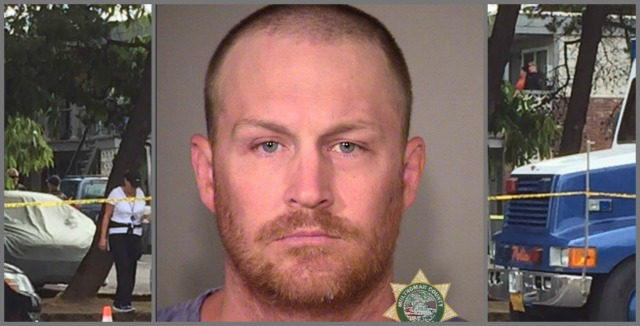 PORTLAND, Ore. -- The former girlfriend of a Portland man now suspected in another woman's murder told police she believed the man would eventually kill her, reports The Oregonian.

Spencer Thomas Johnson, 37, is suspected of murder after his live-in girlfriend, 48-year-old Cory Jonell Lumber, was found dead from a single gunshot wound Saturday night in their Portland home, reports CBS affiliate KOIN. Johnson was detained soon after police arrived but not arrested and booked until later.

A police report from eight months ago obtained by the Oregonian says Johnson's girlfriend at the time - not the woman who he's accused of killing - told police she was afraid of him.

The police report says officers came to the 43-year-old woman's Portland home last October after an out-of-state relative requested a welfare check. When officers responded, police said they saw Johnson walk toward her with a gun in his right hand, the paper reports. Both officers reportedly drew their pistols and ordered the man to drop the weapon.

Police said he ignored several orders to drop the gun and kept walking towards the woman. He allegedly stood about five feet away from her, still holding the gun, saying, "You called the cops... I can't believe you called the cops."

Eventually, reports the paper, he turned over the weapon.

Was the fatal shooting of a college football player justified?

The woman reportedly told police Johnson had repeatedly threatened to shoot her and had hurt her with his hands. The report said, "She feels that he is eventually going to kill her."

Johnson reportedly told police he wasn't sure who the officers were and he was trying to protect his girlfriend from intruders. He told police he had another gun in the bedroom and about 30 other weapons at other locations, including AR-15 rifles.

Johnson reportedly pleaded guilty in April to interfering with a police officer. He was sentenced to 18 months of probation with restrictions on drinking alcohol and owning guns, and was required to take a domestic violence class, the paper reports.

Johnson will be arraigned Tuesday on domestic violence charges of murder and unlawful use of a weapon in Lumber's case, reports KOIN. Police say the weapon he used to kill Lumber was a 9mm pistol. It's not clear whether it's the same weapon referenced in the 2015 police report.