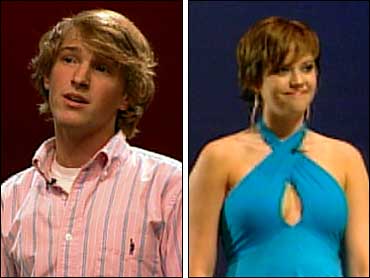 Former "American Idol" contestant-turned-star-of-the-stage Frenchie Davis, who rejoined the cast of "Rent," chatted with The Early Show co-anchor Julie Chen and took in the performances of the two "My Broadway Debut" contestants who did numbers from "Rent."

Cortney just completed her junior year at the University of Michigan, where she is majoring in musical theater. Cortney was reared in Indiana where, in 2003, she was crowned the state's Junior Miss. Looking back on pageant life; Cortney says she found performing to be the most rewarding element.

She identifies strongly with the title character in the musical "Thoroughly Modern Mille," a small-town girl determined to have big experiences.

Cortney was awed by New York City during her first visit there as a high school student, Now she visits the Big Apple several times a year. "I grew up being so affected by theater," she says. "And it offers such a chance to speak to the people of my generation."

Cortney plans to spend this summer performing at the St. Louis Municipal theater (MUNY), which bills itself as America's largest outdoor theater. Cortney will be joined at the MUNY by fellow "My Broadway Debut" contestant and musical theater classmate Andrew Arrington, who is slated to audition on The Early Show Thursday, June 1.

A native of central Virginia, Justin just completed his first year at Florida State University. Justin chose Florida State over a conservatory because he wanted to study at an institution with a strong musical theater program that could also offer a traditional university experience.

Justin caught the musical theater bug when he played a street urchin in a local production of "Singin' in the Rain." (He went with a friend and wound up getting a part in the show.) Soon, he was performing in as many as seven regional theater productions a year.

He's been performing on stage for much of his life, but, to him, nothing beats a musical. "I enjoy acting," he says. "But it's just not the same without the music."