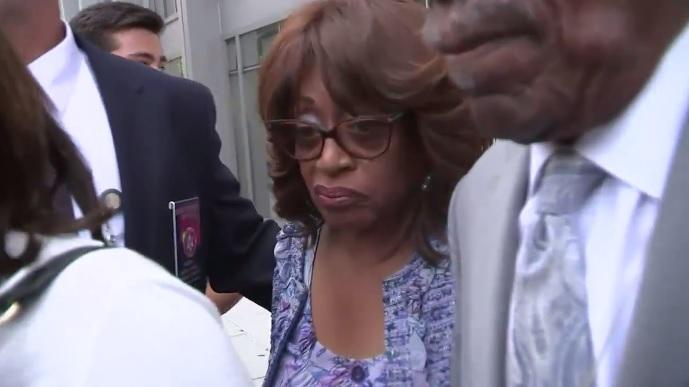 JACKSONVILLE, Fla. -- After a historic, nearly 25-year career representing Florida in Congress, former U.S. Rep. Corrine Brown was found guilty on Thursday of taking money from a charity that was purported to be giving scholarships to poor students.

The verdict came after prosecutors outlined a pattern of fraud by Brown, 70, and her top aide that included using hundreds of thousands of dollars from the One Door for Education Foundation for lavish parties, trips and shopping excursions. She was convicted of 18 of the 22 charges against her, including lying on her taxes and on her congressional financial disclosure forms.

Wearing a lavender suit, Brown watched the judge read each verdict in a silent courtroom with no visible reaction. She later left the courthouse holding onto the arm of a companion, surrounded by dozens of reporters. A few supporters shouted "We love you Corrine!" and "Keep the Faith!" as she silently made her way to a waiting car.

CBS affiliate WJAX-TV in Jacksonville, Florida, tweeted that one person could be heard crying softly in the courtroom and that Brown remained stoic as the verdicts were read.

Brown, a Democrat who was one of the first three African Americans to be elected to Congress from Florida since Reconstruction, represented the district that included Jacksonville since 1993.

Since her indictment last summer, she had been publicly defiant of the government's charges, saying in a statement she was among black elected officials who have been "persecuted." She had pleaded not guilty to all of the charges, including the fraud, but lost re-election last fall after her indictment.

"Former Congresswoman Corrine Brown violated the public trust, the honor of her position, and the integrity of the American system of government when she abused one of the most powerful positions in the nation for her own personal gain," Acting Assistant Attorney General Kenneth A. Blanco, said in a statement after the verdict.

Key to the government's conviction was the testimony of Brown's former chief of staff, Elias "Ronnie" Simmons, and the charity's president, Carla Wiley. Both pleaded guilty after their federal indictments for misusing the charity's funds, and testified against Brown.

Federal prosecutors said Brown and her associates used One Door to bring in more than $800,000 between 2012 and 2016, including a high-profile golf tournament at TPC Sawgrass. Brown's indictment said the Virginia-based One Door only gave out one scholarship for $1,200 to an unidentified person in Florida.

Brown testified in her own defense, saying she was left in the dark about the goings-on with One Door's money, and blamed the theft on Simmons.

Brown said she left those details to Simmons and other hired staffers, and said she should have paid more attention to her personal and professional finances.

WJAX reports that Brown will not immediately go to jail. She will be sentenced in 90 days or more.

The FBI Jacksonville Division released a statement about the verdict:

"Former Congresswoman Brown took an oath year after year to serve others, but instead she exploited the needs of children and deceived her constituents to advance her own personal and political agendas. Corrupt public officials undermine the integrity of our government and violate the public's trust, and that is why investigating public corruption remains the FBI's top criminal priority.  I am proud of our special agents, analysts and support personnel who spent countless hours following the money trail in this case, and thank our law enforcement partners at the IRS-CI and U.S. Attorney's Office for their efforts to hold Brown and her associates accountable for their inexcusable actions."

WJAX adds that Rep. Al Lawson said his thoughts and prayers are with Brown and her family. He had won Brown's seat in the November election.

"It came quicker than we thought," Lawson said in a statement to WJAX. "Our thoughts and prayers are with her and her family.  She's done a lot for this community and can't take that away from her."

Late Thursday, Brown's attorney provided WJAX a statement on her behalf as seen below in this tweet:

Counts 18 and 20 were related to Ronnie Simmons only.