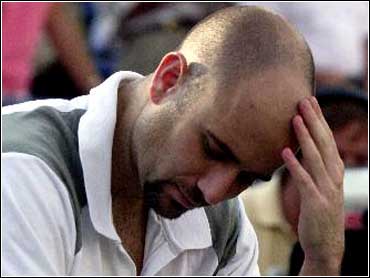 Agassi, a five-time winner of the hardcourt tournament, was erratic all afternoon from the baseline. He committed 38 unforced errors and finished with four double faults, including one that ended the first set.

"Of course Andre didn't play his best tennis, but it is always the same when one guy plays well the other is difficult to get through," the second-seeded Corretja said. "If he always played his best, he would be unbeatable."

Agassi's first sign of faltering came when he was serving at 2-3 in the first set. Facing a break point, Agassi double faulted, something he would do again in the set while serving at 2-5.

Agassi appeared to return to the form that he had displayed earlier in the week by winning five consecutive points in the second set's opening game to break Corretja's serve. However, the 26-year-old Spaniard responded by breaking Agassi right back in the next game.

"The guy played an obscene game. He came in and made a couple of beautiful backhand volleys up the line," Agassi said. "He played well to stop the momentum."

After that, a clearly frustrated Agassi struggled to stay in the match.

With Corretja serving at 1-1 in the second set, Agassi sent a forehand error into the net, prompting Agassi to slam the strings of his racket into his foot twice, severely altering the shape of the racket. After Corretja held, the new racket was banged against Agassi's equipment bag during the changeover.

There would be no more threat from Agassi during the match. Corretja, who earned $115,000 for his victory, kept Agassi off balance the rest of the way, using his arsenal of groundstrokes to hit 21 winners and move Agassi around the court and win his second hardcourt title of the year.

"Sometimes I tried to mix it up, with my forehand I was trying to move him all around. It worked pretty well for me," Corretja said.

The win gave Corretja his fourth title of the year, tying him with Lleyton Hewitt and Sunday's winner in Indianapolis, Gustavo Kuerten.

Sunday's match was the first time on the ATP Tour this year the top two seedhave met in the final.

The day only got longer for Agassi. After the singles final he and Sargis Sargsian of Armenia lost the doubles final to the top-seeded team of Alex O'Brien and Jared Palmer, 7-5, 6-1.