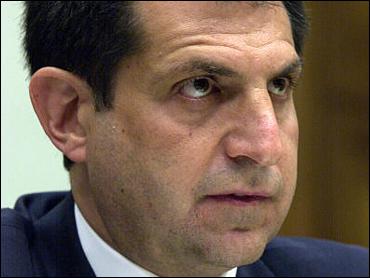 Former top Citigroup analyst Jack Grubman said in an e-mail that he raised his rating of AT&T stock in part because his boss helped get Grubman's twins into an exclusive nursery school.

Citigroup chief executive Sanford Weill, in a memo to senior executives Wednesday, acknowledged that he intervened on behalf of star telecommunications analyst Jack Grubman and that Citigroup had pledged $1 million to the 92nd Street Y, which runs the nursery school. But he denied those steps were in exchange for the upgrade of AT&T.

"I tried to help Mr. Grubman because he was an important employee who had asked for my help," Weill said. "Although my effort to help an employee's children is what led me to call the 92nd Street Y, the Y is a superb institution and our support is consistent with Citigroup's philanthropic efforts."

Weill repeated that he never influenced Grubman's stock research and said it was "deeply upsetting that my intentions were so grossly distorted in this e-mail."

Grubman's lawyer, Lee S. Richards III, was in a conference and there was no immediate statement, a woman answering the phones at his New York office said.

The contents of the e-mail was first reported by The New York Times and The Wall Street Journal, who cited people who had read it or were involved in the investigation of Grubman and other analysts for alleged manipulation of stock ratings.

The latest twist came a day after Grubman admitted he lied when he told a friend in an e-mail that he changed his AT&T rating to help Weill win a boardroom power struggle. Grubman said in a statement Tuesday that the claims in a January 2001 e-mail were empty boasts designed to impress the friend.

Grubman wrote to the colleague that Weill pushed him to review his rating of AT&T stock to curry favor from AT&T CEO C. Michael Armstrong, a Citigroup board member, in a bid to oust a boardroom rival.

Weill also denied that account in his memo. "I have said before, and will say again: I never told any analyst what he or she had to write and I never would," he said. "Nor would I ever attempt to manipulate a board member's vote. Any suggestion that I did is just wrong."

In the late 1990s, Grubman became one of Wall Street's most powerful analysts. His advice was sought and closely followed by both top executives making billion-dollar deals and small investors who staked their savings.

When technology stocks collapsed and many high-flying companies such as Global Crossing and WorldCom fell in bankruptcy or scandal, he and other leading analysts were accused of touting weak stocks to lure business to their companies.

In a filing with the Securities and Exchange Commission on Wednesday, Citigroup said Grubman and its Salomon Smith Barney unit have been named in some 62 class-action complaints.

New York State Attorney General Eliot Spitzer, who has been probing conflicts of interest at Wall Street firms involved in researching and trading stocks, is interested in what role Weill had in Salomon's AT&T rating, including an upgrade by Grubman right before the telephone giant was planning a massive stock sale to finance its wireless unit.

Last month, Citi said it was separating its stock research from its investment banking operation, which is in line with an industrywide restructuring being drawn up by federal and state regulators.

In the e-mail memo, Grubman said Weill was seeking Armstrong's support to "nuke" Citi's then co-chairman John Reed, the Journal said, citing people who have reviewed it. Reed retired in April 2000 after two years of clashing with Weill following the $37 billion merger of Reed's Citibank and Weill's Travelers Group.

In his statement Wednesday, Grubman said, "I have said a number of inappropriate, even silly, things in a few private e-mails that have been made public over the last few months. The contents of these particular e-mails, while personally embarrassing, are completely baseless.

"My research on AT&T was always done on the merits," he said. "It was not designed to help Salomon Smith Barney get investment banking business, nor was it designed to influence Mike Armstrong's vote on Citigroup board matters."

Grubman has a history of exaggerating his importance. Two years ago, he acknowledged to Business Week magazine that he once pretended to have graduated from the Massachusetts Institute of Technology instead of his real alma mater, Boston University.

Weill said in his statement that he had only suggested to Grubman that he "take a fresh look at AT&T in light of the dramatic transformation of the company and the industry. I always believed that Mr. Grubman would conduct his own research and reach independent conclusions that were entirely his own."