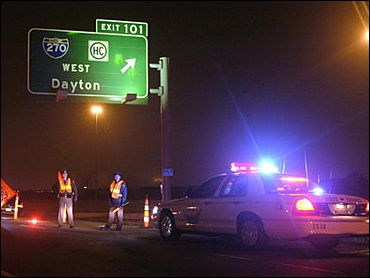 A second person has called 911 and claimed to be the shooter responsible for a string of 20 shootings around Columbus, Ohio, investigators said on Saturday.

The Franklin County Sheriff's office said its communications center took the call at 2:23 a.m. Saturday from a man who said he was the "highway shooter."

"It's gonna get worse. I am intended to start shooting at the police now," the caller said, according to a sheriff's news release. The caller said he was doing this because the police have "corrupted the world."

It appears the call was not made by the same person who claimed to be the highway shooter in four 911 calls to Columbus police on Monday, the sheriff's office said.

Investigators released a copy of the 911 call, asking the public to listen to the recording and call the highway shootings tip line if they recognize the voice or have information on who the caller might be.

In the earlier calls, the caller identified himself as the highway shooter twice and also twice claimed to have shot a car on Interstate 71. Police had no reports of highway shootings on Monday.

Police were investigating the female dispatcher who took the calls for Columbus police, saying she mishandled the situation by not appearing to take the calls seriously.

One person has been killed in the shootings along or near Interstate 270, south of the city, since May. No one else has been struck.