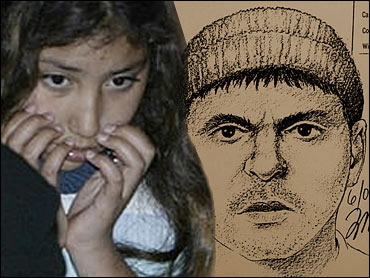 Police in San Jose on Monday took into custody a man they believe matches a description of the person who abducted a nine-year-old girl last week.

The girl, Jennette Tamayo, was taken from her home Friday after the abductor attacked her mother and brother. She surfaced Sunday night at a convenience store in Palo Alto.

At a news conference Monday, Jennette's mother thanked the police, her neighbors and those who prayed for her family. Rosalie Tamayo warned other mothers to be concerned about the children's whereabouts, according to a translator.

The potential suspect, who was not identified, was taken into custody around 8:30 a.m. after police served a search warrant on his San Jose home where he was staying with a friend, Police Chief William Lansdowne said.

On Monday morning, the man tried to fight off officers and was taken to the hospital after a police dog bit him, Sgt. Steve Dixon said.

"We believe we've found him," said Deputy Chief Rob Davis, who indicated that Jennette directed police to the location where the man was picked up.

Police released a sketch of the man Saturday. They described him as being in his 30s to early 40s, from 5-feet-2 to 5-feet-5-inches tall, weighing about 160 pounds. He was dark haired, unshaven, and wore a gray beanie and silver colored shirt. He may have scratches on his face or arms from a struggle with Jennette's mother.

Earlier, Landsdowne reported that Jennette was providing police with good information on her ordeal.

"We have been talking to her since she was found," Lansdowne told the CBS News Early Show. "She's in very good spirits and good health and has just a tremendous memory and is helping us very much in this investigation."

Davis said police planned to interview Jennette again later Monday. So far, Davis said, the case appeared still appeared to be a stranger abduction, but added that "the victim has a friend who is related to somebody who knows the suspect."

Investigators believe Jennette remained in the San Francisco Bay area during her abduction. It was unclear if she was escaped or released Sunday. She was injured in the initial abduction and was being examined to see if any physical harm occurred during her captivity.

A surveillance videotape of the crime, made by an elaborate home security system just a few doors away, does not show the suspect's face. However, police believe the video may have made the kidnapper so worried that he decided to release Jennette.

CBS News Correspondent John Blackstone talked with Bobby Ozier, the technician who installed the surveillance system that caught the suspect on tape, and also godson to the home's occupants the Kamfolts. Ozier said the system includes cameras that point in four directions and records in a continuous loop on a 24-hour tape.

In the tape, the kidnapper is seen arriving at the house and waiting for the little girl to get home, then entering the house for 30 minutes before Jennette's mother and 15-year-old brother arrive. The man then attacked the mother and brother before speeding away with Jennette.

About 10:30 p.m. Sunday, Jennette walked into the Eastside Market, said Isa Yasin, the owner of the shop. Yasin said he did not see anyone drop off the girl and could not tell if she had been harmed.

"She was crying and scared," Yasin said.

After talking briefly with the girl, Yasin realized her identity and called police.

The abduction had shaken residents of the quiet middle class neighborhood where Jennette lives with her mother, brother and stepfather. As news of her rescue spread, residents poured into the streets to hug and celebrate

"It was just like a Hollywood script," said neighbor Karen Kamfolt, whose surveillance cameras recorded the kidnapping. "People came from all directions out of their houses."

"This is truly a great day in San Jose," said Mayor Gonzales.

According to figures from the National Center for Missing and Exploited Children, about 800,000 kids are reported missing every year — or about 1 percent of people under 18 in the country.

About 60,000 are abducted by strangers and 200,000 are taken by family members. The most serious kidnappings affect 115 kids annually; of those children, 40 percent are murdered, while 56 percent are recovered safely.