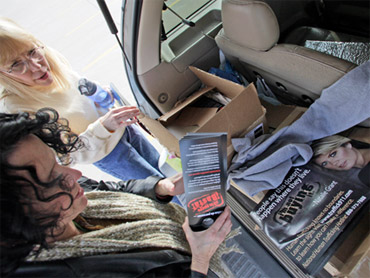 Cities that host the big game often attract a bustling sex trade. This year, Texas authorities and advocacy groups are stepping up their anti-prostitution efforts, especially where young girls are concerned.

"Most people don't know that our children are being brutalized this way, and we have to stop it," said Deena Graves, founder of Traffick911, a Texas organization that launched the "I'm Not Buying It" campaign for Super Bowl XLV. "We need to get mad. We need to get angry about what's happening to our kids right here."

For weeks, volunteers have been canvassing neighborhoods in Dallas and other cities, distributing door hangars and posters with information. Others have placed coasters in restaurants and bars. Traffick911 has also made public-service announcements, some featuring current and former NFL players.

"As a man and as a father of two beautiful girls, I'm not buying it — and neither should you," Dallas Cowboys player Jay Ratliff says in one television ad. "If you're one of these men buying these young girls, I'm telling you that real men don't buy children. They don't buy sex."

Pimps hawking young girls see the thousands of men who travel to the Super Bowl each year as a gold mine of potential clients. Police in and around host cities have tried for years to crack down on prostitution by conducting stings or increasing patrols during Super Bowl week. Only in recent years have underage girls come to light in increasing numbers.

"This is a very large issue. We want people to know what human trafficking looks like," said Thomas Lawrence, an assistant Dallas police chief. Last year's Super Bowl in Miami drew as many as 10,000 prostitutes, including children and human trafficking victims, police said.

Before the big game in 2008, Phoenix police broke up a child prostitution ring involving several teenagers. The following year in Tampa, two men were arrested for advertising the services of a 14-year-old as a "Super Bowl special." They were sentenced to federal prison.

Last year, a Hawaii man was sentenced to more than 20 years in federal prison for taking a teenager with him to Miami and forcing her to work as a prostitute.

To deter men from the temptations of readily available prostitutes, Arlington police have put up an electronic billboard near Cowboys Stadium featuring four men's mug shots with the message, "Dear John, You Never Know! This could be you."

Tekla Roberts, who was a prostitute for nearly 10 years after starting as a teenager, said she raked in the most cash during major golf tournaments, NASCAR races and some pro playoff games in North Texas. She said she met "johns" after advertising her services in publications and online and hanging out in hotels near the venues.

During those sporting events, she remembers seeing an influx of underage girls from out of town being sold for sex by their pimps.

"I would have so many more customers, but I would see pimps with their young girls, too," said Roberts, 32, who gave up the sex trade about six years ago. "My self-esteem was so low, and I remember telling myself it was temporary ... and then I would make so much money around these events."

Advocacy groups and the North Texas Trafficking Task Force are focused on underage victims coming to Dallas ahead of Sunday's game between the Pittsburgh Steelers and the Green Bay Packers. They say pimps who engage in human trafficking place ads for escorts with out-of-town contact numbers and rent houses or buses for parties featuring underage girls.

Advocates say many Americans do not realize child sex trafficking happens in the United States, not just overseas. The National Center for Missing and Exploited Children estimates that at least 100,000 children in the U.S. are victims of prostitution each year.

For years, some Texas cities have been trying to stop the cycle of runaways who become child prostitutes. Dallas police have taken a new approach by treating them as victims. Many are too afraid to seek help or too brainwashed to turn in their pimps.

"We've had to change the way we talk to kids," said Sgt. Byron Fassett, who leads the Dallas department's high-risk victims unit. "Just because a child has made some bad decisions doesn't mean someone has the right to take advantage of that."

Roberts, the former prostitute, hopes the awareness campaign tied to this year's Super Bowl will help change society's perceptions of underage girls in the sex trade.

"I believed that I was making a choice. You have to tell yourself that to survive," she said. "I want people to see these girls as victims. They're not criminals, not bad kids. They are lost and broken."