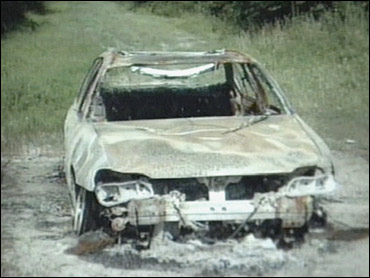 A chemistry teacher who was at least three months behind on her car payments gave passing grades to two failing students who stole and burned her car so she could collect insurance money, a fire investigator said.

Aldine Senior High School teacher Tramesha Lashon Fox, 32, was charged with insurance fraud and arson, and the two students were charged with arson.

Roger Luna, 18, and Darwin Arias, 17, had been failing Fox's class up to their final exam. But Arias received a 90 and Luna an 80, grades high enough for them to pass the semester, said senior fire investigator Dustin Deutsch of the Harris County Fire Marshal's Office.

Luna was arrested Tuesday. Bail was set at $10,000 and he was expected to be arraigned on Thursday, said Lt. John Martin, spokeswoman for the Harris County Sheriff's Department.

Neither Fox nor Arias was in custody early Wednesday afternoon, and they could not immediately be reached for comment. No phone listings could be found.

The teens initially thought her scheme was a joke, but Fox continued to pursue them, Deutsch said. On May 27, the last day of school, the students took the unlocked 2003 Chevrolet Malibu from a shopping mall, drove it to a wooded area and set it on fire, he said.

Fox reported the theft that day, after already having bought a 2005 Toyota Corolla, investigators said. She owed about $20,000 on the Chevrolet and had been facing repossession, Deutsch said.

Aldine Independent School District officials said Fox remained employed while they waited to see the fire marshal's report. The students will probably be placed in an alternative school when they return, depending on what happens to them in court, school officials said.