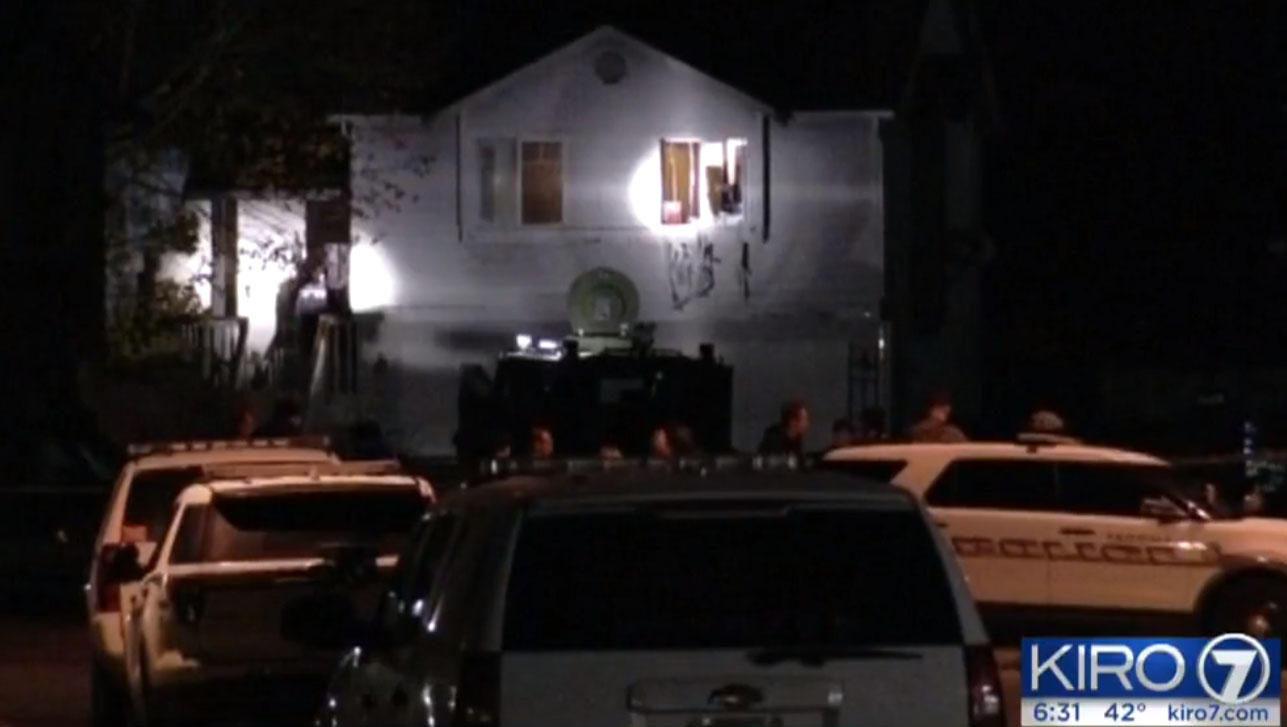 TACOMA, Wash. - A man suspected of fatally shooting a veteran Tacoma, Wash. police officer was shot and killed by authorities early Thursday after an hours-long standoff in which he was using two children as shields, reports CBS affiliate KIRO.

The 45-year-old officer was killed after responding to a domestic violence call around 5 p.m. on Wednesday. The fallen officer, Reginald “Jake” Gutierrez, had served with the department since 1999 and was highly respected and experienced, Tacoma Police Chief Donald Ramsdell told reporters Thursday.

Ramsdell said the incident began Wednesday afternoon when animal control officers working near the house were approached by a woman who said her husband had locked her out and taken her phone. The officers called police.

Gutierrez and his female partner went into the home, and Gutierrez was shot multiple times as he reached the top of the stairs to speak with the suspect, Ramsdell said.

The female officer fired back and ran from the house, taking the wife to safety.

“We had an officer down and shots still firing at the time,” Cool said. Police managed to get the officer out “but they were still taking fire,” she said.

Kristi Croskey, who rented the home to the suspect and his wife, was inside the home at the time and barricaded herself in the bathroom before she was able to escape, KOMO-TV reported.

“They said they just wanted to talk to him and then gunfire started, they didn’t start it,” Croskey said.

At about 9 p.m., Cool said Gutierrez, who had been rushed to a hospital to undergo surgery, had died.

The standoff continued overnight until about 3:30 a.m. Thursday, when the suspect, a 38-year-old man, was reportedly fatally shot by a Pierce County deputy.

At one point there were 185 officers, deputies and troopers at the scene from surrounding agencies.

At a news conference Thursday morning, Pierce County Sheriff’s Deputy Ed Troyer said during the standoff, the suspect was using the children, an 8-year-old boy and an 11-year-old girl, as a shield and was making threats against them.  Officers didn’t immediately know there were children in the house and became aware of their presence during the standoff, Cool said.

At one point, officers were able to separate one of the children from the suspect.

“When they were able to rescue the boy, there was an opening to rescue the girl,” Cool said. “That provoked the shot to take the suspect out.”

Troyer said while the other child was still with the suspect, a Pierce County SWAT deputy was able to take a shot at the suspect, firing one round that killed him. Both children are safe and unhurt.

“We were able to get the suspect cornered and trapped, even though he had two kids,” Troyer said. “We had a SWAT member who had a clear shot. We fired one round, which struck him.”

Troyer said the man refused to surrender during negotiations.

The suspect, who has not been identified, had multiple weapons in the house, according to Troyer. Ramsdell said the suspect did not have a “serious background in regards to criminal history” but there may have been issues with mental illness.

The deputy who shot the suspect, as well as everyone who was involved in the gunfight earlier, will be on administrative leave as is customary.

Croskey, the woman who owns the home, praised the work of Tacoma police to KIRO.

“I want to say the Tacoma Police Department handled this matter with such professionalism... despite one of their own being shot,” she said.

Ramsdell choked back tears Thursday as he described Gutierrez as a team player with a great deal of integrity. He said Gutierrez was a father and had been engaged to be married.

The shooting sparked an outpouring of support from the community and public officials, who left flowers at the front of the police department, under a large police badge carried a black ribbon across the center.

A procession of law enforcement officers escorted the officer’s body from the hospital to the county medical examiner’s office.

Washington Gov. Jay Inslee said “all of Washington grieves with Tacoma, which tonight lost one of their finest.”

The shooting remains under investigation by multiple agencies, including the FBI and the Pierce County Prosecutor’s Office, which will review material to be sure that the police followed their policies in responding to the incident.