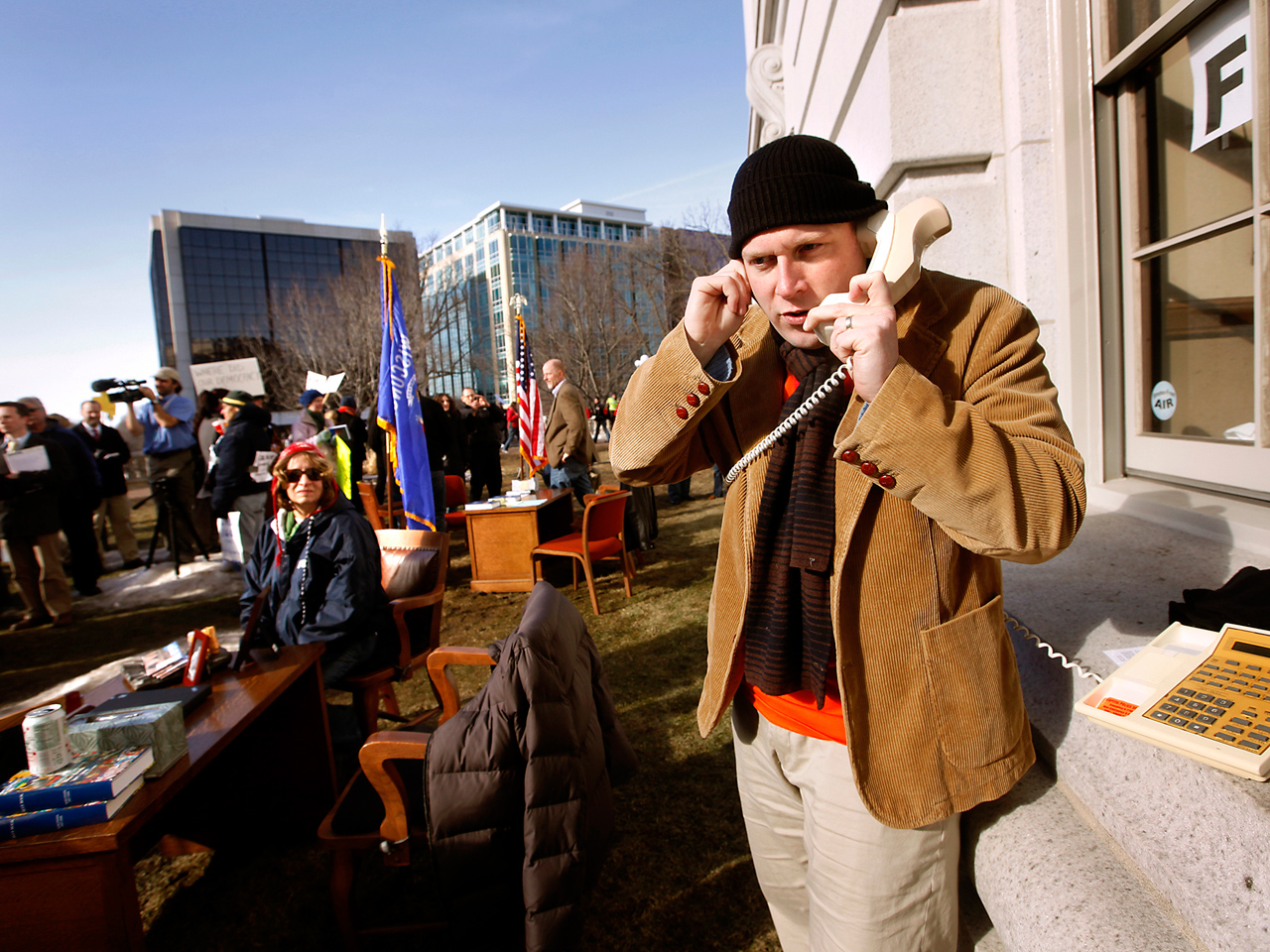 MADISON, Wis. - A Wisconsin state lawmaker has been tackled by police as he tried to enter the state Capitol that is closed to the public.

Democratic Representative Nick Milroy of South Range in northwestern Wisconsin was trying to retrieve some clothes from his office in the Capitol Thursday night. Video from WISN-TV shows police officers pulling him away from a revolving door and tackling him to the ground before he is able to show his ID.

A judge ruled Thursday that no one can stay at the Capitol overnight to protest Gov. Scott Walker's proposal to eliminate most collective bargaining rights for public workers. Milroy was one of four Democratic Assembly members who moved their desks outside the Capitol Tuesday after public access was restricted.

Meanwhile, thousands of Wisconsin state workers were bracing for layoff notices Friday as Gov. Walker and absent Democrats remained in a standoff over a budget balancing bill that would also strip public workers of their collective bargaining rights.

Walker said he would issue 1,500 layoff notices Friday if at least one of the 14 Senate Democrats doesn't return from Illinois to give the Republican majority the quorum it needs to vote. Senate Republicans voted Thursday to hold the missing Democrats in contempt and force police to bring them back to the Capitol.

Senate Majority Leader Scott Fitzgerald canceled Friday's floor session, saying in a statement that Republican senators want time to allow law enforcement to adjust their staffing levels and "help the Capitol to return to something of a sense of normalcy."

The budget balancing legislation has led to nearly three weeks of protests — some attended by tens of thousands of union supporters — in and around the state Capitol, which was completely cleared of demonstrators late Thursday for the first time in 17 nights after a judge ordered the building closed during non-business hours.

The final 50 or so protesters left peacefully about two hours after the judge's order, which also said the state unconstitutionally limited access to the building since Monday and ordered the state to grant greater access to the public by next Monday.

"We decided it would be best for our image to leave tonight peacefully and come back tomorrow," said Matt Rowe, 21, of Madison, carrying an armful of blankets after he left the building.

The protesters' dramatic departure capped a day full of developments, including Walker's threat of massive layoffs he said would be needed to make up for savings not being realized in the stalled bill.

Walker says the bill is needed to ease a deficit that is projected to hit $137 million by July and $3.6 billion by mid-2013. His proposal comes up with the money for this year in part by forcing state employees to pay for half the cost of their pensions and twice their current health care premiums — concessions equivalent to an 8 percent pay cut.

With the labor bill stalled, Walker said he has to issue layoff notices starting Friday so the state can start to realize the $30 million savings he had assumed would come from the concessions. The layoffs wouldn't be effective for 31 days, and Walker said he could rescind them if the bill passed in the meantime.

All state workers, except those at prisons, state hospitals and other facilities open around the clock, would be potential layoff targets, he said.

"I pushed it off as long as I could because I do not want to have layoffs," Walker said.

While Walker said he is actively working with some of the Democrats in hopes of striking a deal, he told The Associated Press in an interview Thursday that he won't compromise on the collective bargaining issue or anything that saves the state money.

"I can't take any of that off the table," he said. "We cannot tear apart this budget. We cannot put this burden on local governments. But if there are other ways they are willing to work with us to find a pathway back, I think that's what people want."

Democratic Senate Minority Leader Mark Miller confirmed there were talks with Walker, but he did not think they were close to reaching a deal.

The statewide teachers union and state workers unions have said they would agree to the benefit concessions — as long as they retain collective bargaining rights.

The Senate majority leader signed orders Thursday finding the 14 missing Democrats in contempt and allowing the chamber's sergeant at arms to use police force to detain them if necessary. Fitzgerald says his orders are binding only if the senators return to Wisconsin.

Sen. Chris Larson said they hadn't done anything illegal and couldn't be arrested.

"There are so many police supporting us, they might have a hard time finding one to bring us back," said Miller, one of the AWOL Democrats.

The Wisconsin Professional Police Association, a union representing 11,000 law enforcement officials from across the state, released a statement from its director, Jim Palmer, slamming the resolution to go after the Democrats.

A memo provided by private attorney Jim Troupis, who was hired by the Senate Republicans and often works with the GOP, said the state Constitution gives them authority to act to compel attendance under its rules.

Once the senators do return, Fitzgerald said they could face reprimand, censure or even expulsion.