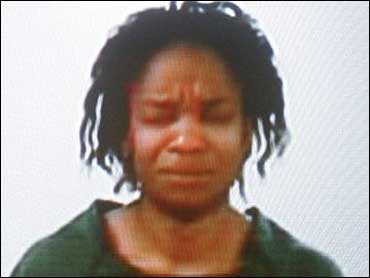 Authorities in Dayton, Ohio, have arrested the mother of a baby girl who died in August 2005 due to high body temperature.

"We have reason to believe and scientific evidence to support that a microwave oven might have been involved in the death of this child," said Ken Betz, director of the Montgomery County, Ohio, coroner's office.

Police say China Arnold, 26, was arrested at her home Monday on a charge of aggravated murder, more than a year after she brought her dead month-old baby to a hospital.

At the time, Paris Talley's death was ruled a homicide caused by hyperthermia, or high body temperature, because of burns. Arnold was arrested initially, then released.

Betz said the case was difficult because "there is not a lot of scientific research and data on the effect of microwaves on human beings."

There was a lengthy investigation before prosecutors found enough probable cause to issue another arrest warrant, said Greg Flannagan, a spokesman for the county prosecutor's office.

Arnold's lawyer, Jon Paul Rion, said his client had nothing to do with her child's death and was stunned when investigators told her that a microwave might have been involved.

"China — as a mother and a person — was horrified that such an act could occur," Rion said.

The night before the baby was taken to the hospital, Arnold and the child's father went out for a short time and left Paris with a babysitter, Rion said. The mother didn't sense anything out of the ordinary until the next morning, when the child was found unconscious, Rion said.

Rion declined to say what the couple told hospital officials at the time.

Arnold, who has three other children, is being held in the Montgomery County jail and plans to plead not guilty, according to her lawyer.

In 2000, a Virginia woman was sentenced to five years in prison for killing her month-old son in a microwave oven.

Elizabeth Renee Otte claimed she had no memory of cramming her son in the microwave and turning on the appliance in 1999. Experts said Otte suffered from epilepsy and that her seizures were followed by blackouts.