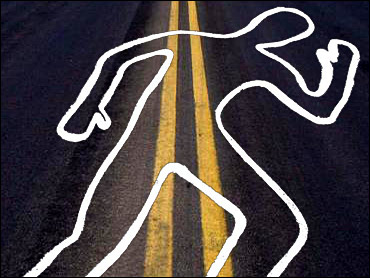 Law authorities say a Long Island, New York driver charged with the road rage killing of a motorcyclist over the weekend served time behind bars for running down a girlfriend in 2001.

Uniondale resident Patrick DeJean has been charged with murder in the death of 24-year-old Igor Kruk on Saturday. DeJean pleaded not guilty and says it was an accident. He was ordered held without bail.

But prosecutors say DeJean also hit his girlfriend with a car four years ago and served six months behind bars. They say the girlfriend was talking on a pay phone when she was hit but she wasn't badly injured.

Nassau County authorities say DeJean was driving in his car in Uniondale on Saturday when he was passed by two men on motorcycles. Police say he followed the men and struck the rear wheel of Kruk's motorcycle.

The impact sent Kruk's motorcycle into a parked car and pinned him. He died at the scene.

Newsday reports DeJean had few words as police escorted him to his court arraignment.

"This, pure and simple, is a case of road rage," said Det. Sgt. Dennis Barry. "The scene looked like a war zone."