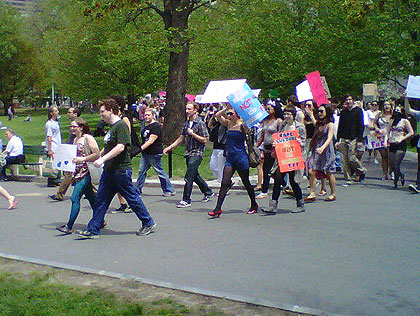 (CBS/WBZ/AP) BOSTON - Chanting "We love sluts!" and holding signs like "Jesus loves sluts," approximately 2,000 protesters marched around the Boston Common Saturday as the city became the latest to join an international series of protests known as "SlutWalks."

The protest movement, sparked by a Toronto police officer's remark that women could avoid being raped by not dressing like "sluts," came to Boston after advocates saw similar events - largely organized through Facebook and Twitter - pop up in Canada, England and other parts of the U.S.

"We wanted to do something to show our support," said Siobhan Connors, 20, of Lynn, Mass., a Boston organizer. "We originally planned for a small event and expected about 30 people."

But by the time the march began Saturday, about 2,000 people - some dressed in lingerie with the words "slut" written across their stomachs - were in attendance.

In January, a Toronto police officer told a group of university students that women should avoid dressing like "sluts" to avoid being raped. He later apologized. The officer who made the comments, Constable Michael Sanguinetti, was disciplined but remained on duty, said Toronto police spokesman Mark Pugash.

However, advocates in Toronto held a "SlutWalk" to protest the officer's remarks and to highlight what they saw as problems in blaming sexual assault victims. Since then, SlutWalks, organized mainly through social media, have been held in Dallas, Ottawa, and Asheville, North Carolina.

According to CBS affiliate WBZ, organizers say the events also were held to bring attention to "slut-shaming," or shaming women for being sexual, and to the treatment of sexual assault victims.