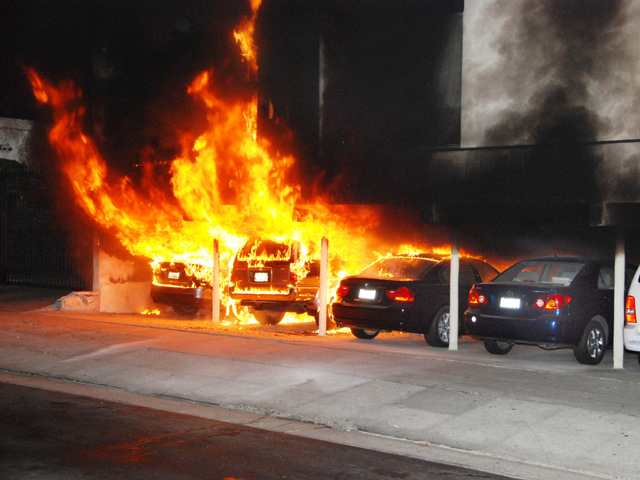 He said he didn't have further details of the blazes, but said arson is suspected and there could be a link to the earlier blazes.

"We believe there might be, but we don't know for sure," he said.

Fire officials said the first report came in shortly after midnight, and the most recent about three hours later.

Early Friday morning, fires were reported in nearly two dozen locations in Hollywood and the neighboring city of West Hollywood during a four-hour period before dawn. In nearly every case, the fire started in a parked car.

Flames from torched vehicles ignited some nearby houses early Friday, including one once occupied by Doors frontman Jim Morrison.

But Collier said that although some of Saturday's blazes are in carports and garages, he didn't have any reports of damage to buildings.

Police up a command post in the North Hollywood area and have called a tactical alert, allowing them to call in more officers.

No arrests have been made and no injuries reported.

Another car fire was reported around 7 p.m. Friday in an underground garage in Hollywood that fire officials were investigating for possible links to the series of arson blazes. Los Angeles Fire Capt. Jaime Moore said that a connection hasn't been ruled out.

Arson investigators "consider it to be an incendiary fire similar to the fires from this morning," he told The Associated Press.

The new fires broke out even as authorities beefed up patrols and urged the public to remain vigilant overnight.

Officials announced at least $35,000 in rewards for information leading to the conviction of the person or persons responsible.

All of the Friday's fires were in a 2-square mile area and most were in densely populated residential neighborhoods where residents would likely be asleep.

Authorities interviewed witnesses and looked for any video footage that may have captured the person, or people, responsible for the spate of crimes. Investigators from four agencies met for a strategy session, while Los Angeles officials summoned investigators from the federal Bureau of Alcohol, Tobacco, Firearms and Explosives.

Fire officials couldn't say whether the rash of fires was the work of a copycat. There was a series of other arson fires early Thursday, also in Hollywood. Two people have been arrested and remain in custody for those blazes, officials said.

One of the homes was in Laurel Canyon, where Morrison and his girlfriend once lived, neighbors said. The winding road was the inspiration for the Doors' hit "Love Street," and the house was listed for nearly $1.2 million earlier this year, according to real estate website Zillow.com.

Sandy Gendel, who owns a nearby restaurant, said he heard explosions from what he later determined were likely car tires. He saw flames 30 feet high coming from the deck of the former Morrison house and a gutted Mazda Miata.

"It was just like a towering inferno," Gendel said.

Los Angeles Fire Department spokesman Jaime Moore said it is plausible that one person in a car, on a motorcycle or on a bike could have set all the fires, considering the limited area the blazes broke out in.