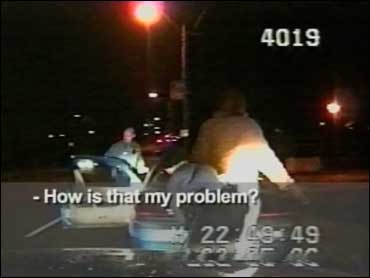 Two police officers were suspended indefinitely with pay Thursday as an investigation continued into their arrest of a pregnant woman who had a miscarriage a day after she was thrown in jail.

The suspensions came two days after police released a videotape showing Sofia Salva telling officers during her arrest last year that she was three months pregnant, bleeding and needed to go to a hospital. The tape shows officers ignoring her pleas.

After the ninth request, the tape shows, a female officer asked: "How is that my problem?"

Salva, 32, has sued officers Melody Spencer and Kevin Schnell and the police department for wrongful death and personal injuries.

She was arrested Feb. 5 and held overnight on traffic violations and outstanding city warrants. After being released the next morning, she delivered a premature baby boy who died immediately after birth, according to the lawsuit filed Friday in Jackson County Circuit Court.

Salva's attorney, Andrew Protzman, could not be reached for comment Thursday.

Corwin said he felt the incident was serious enough to suspend the officers even though an internal investigation is not complete.

"I ask for patience from the community as we investigate this incident," Corwin said. "I regret that this incident has reflected negatively on the members of this department, the vast majority of whom do their job in an exemplary fashion every day."

Corwin read from a written statement and declined further comment, citing the lawsuit.

Spencer has been with the police department for four years and Schnell less than two years. No telephone numbers are listed for either. Police spokesman Capt. Rich Lockhart said both officers declined comment.