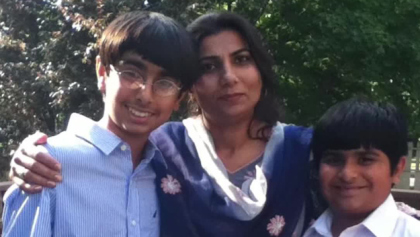 PLEASANT VALLEY, N.Y.  - New York State Police say a pharmacist first killed his wife, and then used a shotgun to kill his two sons and himself, in what they are calling a "senseless tragedy" they are trying to piece together roughly 90 miles north of New York City..

Abbas Lodhi first shot his wife, Sarwat Lodhi, 43, then killed 13-year-old Mujtabah and 9-year-old Zain, state police Trooper Melissa McMorris said Friday. The body of Abbas Lohdi, 49, and the body of one his sons were found in a parked car at a Pleasant Valley supermarket Thursday morning. The body of his other son was later found at the family’s home in Dutchess County.

Sarwat Lodhi's body was found Friday afternoon by a homeowner along a road 13 miles away in Wappingers Falls, McMorris said. Police had been hoping the mother could have survived the massacre of her family, according to CBS New York.

McMorris said Abbas Lodh and his sons died of gunshots to their chests and his wife may have been killed with the same weapon.

The investigation into what was behind the killings was continuing with reviews of computer files, GPS records and other evidence, McMorris said.

"I don't believe we have a motive or a note yet," she said.

Authorities say the parents moved from Pakistan during the 1990s and became U.S. citizens. Abbas Lodhi was a state-licensed pharmacist since 1993 and recently closed his pharmacy in Hyde Park, N.Y.

Police were still piecing together the series of events, but McMorris said Abbas Lodhi's cellphone signal was located near where his wife's body was found at about 1 p.m. Wednesday, when their children were at school.

At about 8:30 a.m. Thursday, a worker in a supermarket plaza found the bodies of Abbas Lodhi and fourth-grader Zain in an SUV along with the shotgun. Mujtabah, an eighth-grader, was found at the family's home, authorities said.

Nearby business owners who knew Abbas Lodhi told the Poughkeepsie Journal he worked hard and was a fan of soccer and cricket.

Jean McArthur, owner of Pay-less Oil and McArthur's Wine and Liquors, said she learned three weeks ago that Lodhi was selling his business. She said he was "just an average guy trying to make a living."

A photo of Sarwat Lodhi provided by police appears to be from the same image showing her with her sons that she used for her Facebook profile, which includes a number of friends in or from Pakistan.

The Arlington Central School District, where the boys were enrolled, said it was providing grief counseling for schoolmates and staff.