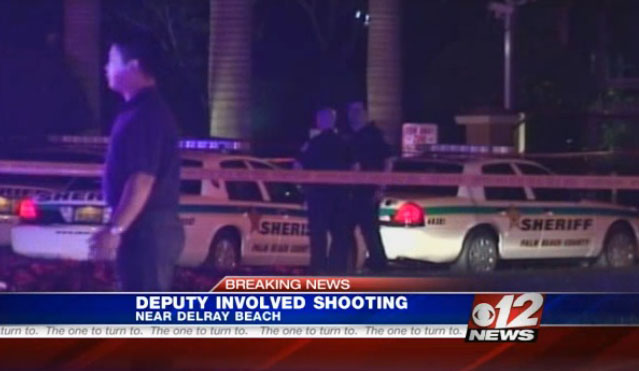 DELRAY BEACH, Fla - Authorities in South Florida say deputies fatally shot a naked man after he attacked a retired police officer and bit another man on the face Tuesday night in Delray Beach.

CBS affiliate WPEC reports that the suspect was a black male, 6'3", approximately 250 pounds and appeared to be "on something," according to Sheriff Ric Bradshaw.
The suspect, completely nude, attacked a retired New York police officer before chasing an adult male and his 10-year-old son on Military Trail. The child was injured trying to escape the suspect.
At some point, he started fighting an 18-year-old male who defended himself with a box cutter. The suspect then bit the 18-year-old on the face, according to WPEC.
Deputies arrived on the scene after receiving several 911 calls reporting the events.
Deputies contained the suspect and tried unsuccessfully to calm him down. According to Bradshaw, the suspect charged at deputies and, after a Taser was deployed and had no effect, an officer fired three shots and struck the naked man.
The adult male and his 10-year-old son were treated for injuries, as was the 18-year-old whose face was bitten.
The suspect was transported to a local hospital where he was pronounced dead. Bradshaw said it wasn't immediately clear whether he died from gunshot wounds or from a medical condition.
Sheriff Bradshaw says the suspect appeared to "be on some type of narcotic."
The shooting remains under investigation.