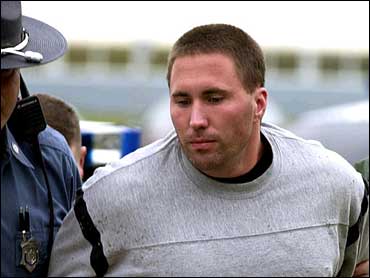 A convicted killer and two other inmates who escaped from prison by cutting through two fences were captured Thursday, a day after the breakout, at a Massachusetts campground 100 miles away.

Authorities said the men were unarmed and offered no resistance.

Police surrounded the campground in Plymouth, saw one of the escaped convicts leaving and arrested him without the knowledge of the two others, Massachusetts state police Sgt. Ed Principe said. Police used a bullhorn to address the others about 30 minutes later.

Police "advised them they were completely surrounded and to come out with their hands up," Principe said. "They complied and were arrested without incident."

The three broke out on Wednesday from the New Hampshire State Prison in Concord. A jogger found their green prison jumpsuits near an exit off Interstate 89, about 3½ miles from the prison, State Police Maj. Barry Hunter said.

Investigators said the inmates apparently had outside help getting street clothes and transportation.

Earlier Thursday, a man believed to have helped them shot himself in the head when police traced him to a Salem motel. The man, Shane Laslie of Concord, was pronounced dead hours later at a Boston hospital. Police were never able to question him.

It was not immediately clear how Laslie, 26, came under suspicion. He was paroled from the prison in 2002 on a cocaine possession conviction.

Hunter said notes were exchanged between Laslie and some of the escapees, and Laslie's capture "gave us some insight" into the trio's plan. He would not elaborate and said he didn't know why Laslie allegedly helped the three.

Gil, 31, was sentenced in 2001 to 45 years to life after pleading guilty to stabbing a man to death in a motel room in 2000. Dick, 23, was serving 15 to 30 years for attempted murder of police officers during a 1999 shootout. McNeil, 35, was imprisoned for parole violations on drug convictions and other crimes. He was sentenced to 35 years in prison in 1994.

Officials said the escape was the first in at least a decade from the medium-security section of the prison, which is on a busy street north of downtown. Lyons said another inmate tried to climb over one of the razor-wire fences in the early 1990s but was cut badly and caught.