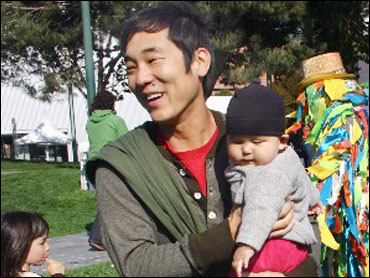 The San Francisco man who sought help for his stranded family and got lost in the snowy wilderness died of hypothermia near a fishing lodge stacked with food, authorities said.

James Kim, 35, had no way of knowing about the Black Bar Lodge. His body was found in shallow water feeding Big Windy Creek, about a mile away from the lodge, where he could have found shelter, warmth and enough food for months, authorities said Thursday.

"James Kim did nothing wrong," Oregon state police Lt. Gregg Hastings said. "He was trying to save his family."

Searchers found the body of the 35-year-old online editor on Wednesday, two days after rescuing Kati Kim and daughters, Penelope, 4, and Sabine, 7 months, from the car they had used as shelter for more than a week in Oregon's snowy coastal mountains.

A medical examiner said Thursday he could not determine exactly when James Kim died.

"I wish Mr. Kim would have found the place," Black Bear Lodge owner John James said. "It would have been a beautiful ending to a sad story."

On Saturday morning, Dec. 2, James Kim decided to go for help. He thought a small town was just four miles away, but he had guessed his location wrong. The town was 15 miles away, reports CBS News correspondent John Blackstone.

The Kims had driven from San Francisco to Seattle for Thanksgiving and were on their way home. They planned to spend the night of Nov. 25 at a luxury lodge outside Gold Beach on the coast.

Driving south on Interstate 5, the Kims had missed the turnoff to the coast and instead drove through the Siskiyou National Forest.

They passed signs warning that Bear Camp Road may be blocked by snow, but kept going. At times, James had to stick his head out the window to see through the falling snow, said Hastings.

They descended into a confusing warren of logging roads.

By the time they turned around, they were 15 miles off Bear Camp Road and stopped where they hoped to be spotted from the air, fearing they were running out of gas, searchers said.

Kati Kim told investigators they stopped at 2 a.m. Nov. 26, but could get no cell phone service. They stayed in the car as it snowed and rained for three days.

On the eighth day, James Kim decided to look for help. His wife told investigators he thought he was just four miles down the Rogue River from the community of Galice. It was closer to 15, but he felt he could follow the river to find help.

Kim had walked five miles up a road, then five more miles down rugged Big Windy Creek. Despite his long hike, he was only a mile from the car, which was near the road to the lodge.

When Kim's body was found Wednesday, it ended a search that had become personal for many of those working on it, reports Blackstone.

That was clear when Undersheriff Brian Anderson stepped to the microphones with bad news.

"At 12:03 today, the body of James Kim was located down in the big windy creek ... uhhhh," and Anderson walked away, tearful.

On Thursday, the Kim house — with its cheery, red garage door and window sills, perched up a small hill — stood dark and empty in San Francisco's Noe Valley neighborhood.

A few blocks away, a sign outside Church Street Apothecary, one of the Kims' two boutiques, read: "We will be closed for a few days. Please respect our privacy."

Below the sign, scores of flowers, cards and candles conveyed warm wishes from neighbors.

"Your dad is a hero. Your dad is a great, kind man. He will always love you very much," said a handmade card written in a child's scrawl, signed by "Malia."