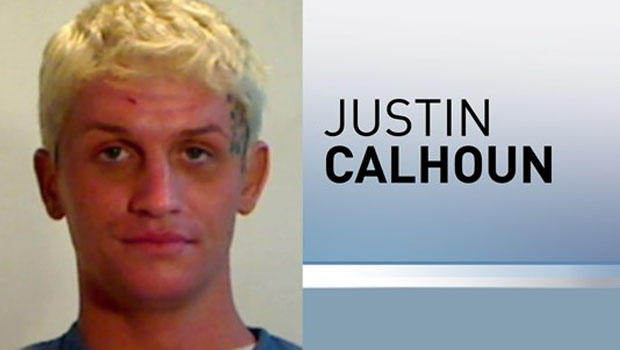 KEY WEST, Fla. — A Key West man is dead after allegedly being beaten and stabbed in the eyes after an argument over cannibalism, reports CBS Miami.

Justin Calhoun, 24, is facing murder charges in the death of Mark Brann, 67.

According to a spokeswoman for the Monroe County Sheriff, Calhoun self-identified as a woman when being booked and is being housed in a male facility, but inside a private cell. In the arrest affidavit, detectives who spoke with Calhoun use male pronouns.

The arrest report obtained by CBS Miami contains disturbing details about the alleged assault. According to the document, Calhoun, who CBS Miami reports is a stripper, told police that she and Brann were romantically involved. Calhoun was reportedly homeless and often spent the night at Brann's residence.

On Monday, Calhoun told detectives that she believed Brann was a "cannibal" and that the two began arguing when Calhoun asked about it. Calhoun said Brann grabbed a gun, forcing a struggle. The gun went off but no one was hit. Calhoun said the fight continued until she gained control and aimed it at Brann, but when she tried to shoot the gun jammed.

According to the arrest report, Calhoun said she told detectives she grabbed a pen and stabbed Brann in both eyes, then, when Brann apparently was yelling, Calhoun told police she grabbed a broken piece of wood from a dresser, damaged during the fight, and stuffed it into Brann's mouth to shut him up.

Police say Calhoun told them she stood up and "stomped" on the piece of wood, driving it further into the man's mouth, and continued to beat him by slamming a dresser drawer down onto Brann's head and throat.

CBS Miami reports that Brann's roommate tried to get in the room to help but Calhoun locked the door.

Calhoun told police she grabbed her backpack, money, and a dress to wear, then jumped out of the bedroom window naked.

She avoided Key West Police by jumping fences and climbing on roof tops.

After being arrested, police reportedly recovered cocaine and Brann's prescription pills in Calhoun's backpack, as well as more than $10,000 in cash.