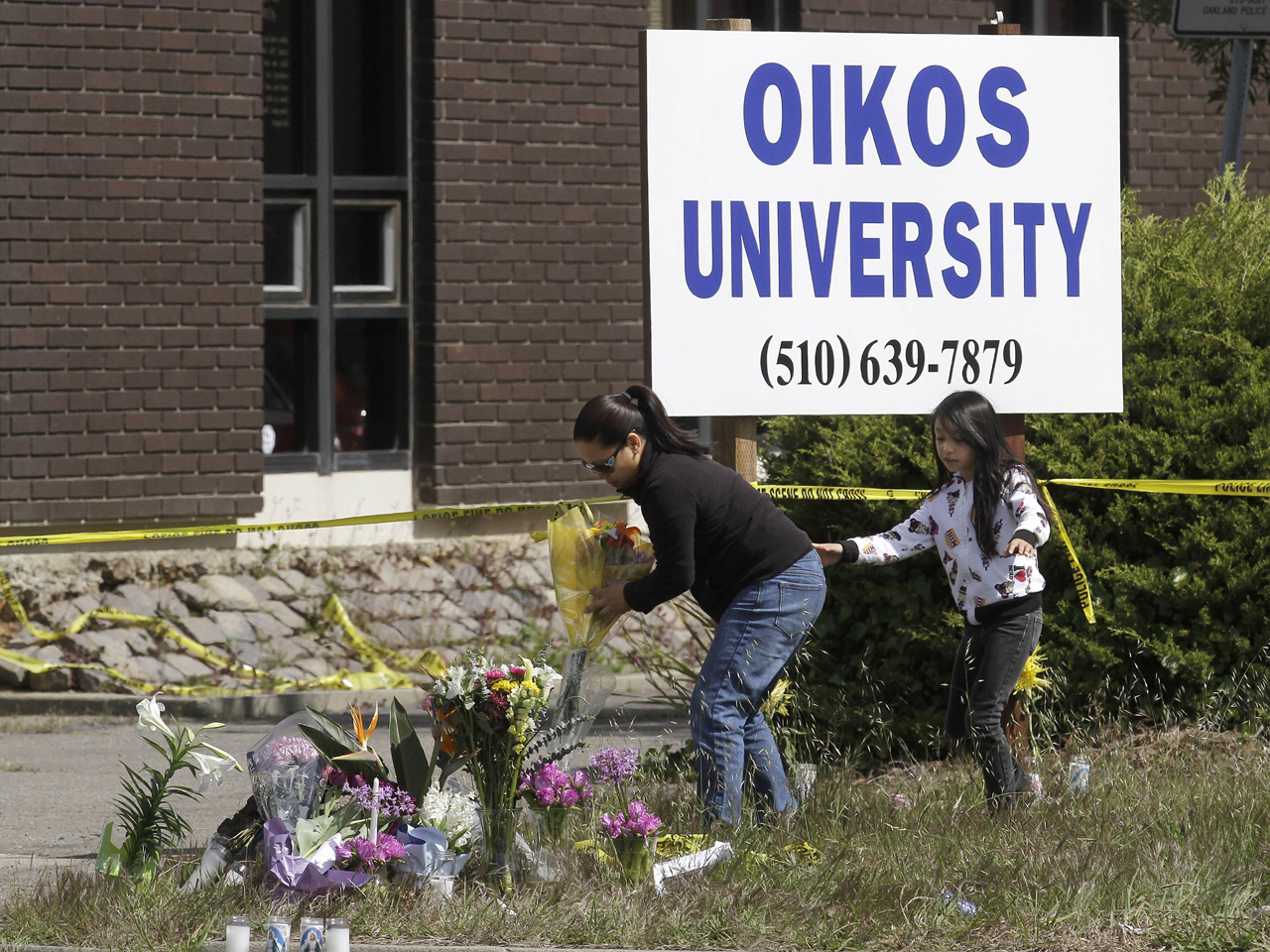 OAKLAND, Calif. - Police said Friday they found a gun they believe was used in a deadly shooting rampage at a California college.

Oakland police have been combing waterways and trash bins since Monday, when a gunman opened fire at tiny Oikos University, killing seven people and wounding three others.

One Goh surrendered to authorities and was charged with seven counts of murder and three counts of attempted murder.

Investigators said Goh initially cooperated with them in discussing what happened and possible motives. But they say he would not tell them the location of the .45-caliber semiautomatic handgun used in the shooting.

The gun was discovered in the shallow waters of a tributary of San Leandro Bay, about a half-mile from the school.

Its serial number matches that of a gun purchased by Goh, police said.

Students at the Christian college were waiting for the police probe to advance enough so they can return to class.

Oakland police spokeswoman Johnna Watson said in an email late Thursday that the school was a large crime scene and police could not say when they would be finished with their investigation.

Several students and staff were allowed to go back inside the school Thursday for the first time since Monday's shooting as police escorted them one-by-one to retrieve belongings.

As he waited his turn, Tenzin Topchen, 26, stood anxiously while trying to calm his lingering fears.

"I'm nervous, very nervous," Topchen said before quickly gathering his items and driving off in his silver Toyota Camry, which had been parked behind the school for three days.

Dechen Yangdon, 27, also waited nervously before two investigators took her inside. She is being hailed as a hero for intuitively locking her classroom door and turning off the lights after hearing gunshots. The shooter tried kicking in the door and then fired at it. No students were injured.

As investigators slowly walked Yangdon back inside the school, they shook her hand and praised her.

When Yangdon was later asked what it was like being back inside the school, she gave a blank stare, bowed her head, grabbed her husband's hand and quickly walked away.

Moments earlier, a small group of school staff formed a small circle and prayed near a makeshift memorial of flowers and candles. Many openly wept and tried to console each other. As he waited his turn, Tenzin Topchen, 26, stood anxiously while trying to calm his lingering fears.

The shooting suspect, One Goh, 43, has been charged with seven counts of murder and three counts of attempted murder, plus a special circumstance allegation of committing multiple murders that could make him eligible for the death penalty.

He did not enter a plea or make a statement during his first court appearance Wednesday.

Police said Goh acknowledged forcing a woman from her office at gunpoint into a classroom, where he fatally shot several people before fleeing in one victim's car, according to a police affidavit.

Meanwhile, police said Thursday they were investigating the possibility that the gunman had multiple targets that he intended to kill in his rampage.

Chief operating officer of Oikos University told KGO-TV that Goh had become upset at one of three meetings with college officials over a financial dispute. He was angry because they would not fully refund him his tuition for the nursing program, which was between $4,000 to $6,000. The school only offered partial reinbursement. Nursing program director Ellen Cervellon previously said she met several times with Goh over the tuition issue and that he said students had been picking on him.

The director of the nursing program at Oikos University has said she believed she was the intended target. However, Oakland Police Chief Howard Jordan said the gunman had been seeking a different female administrator.

Watson, the police spokeswoman, would not identify the other administrator but said she no longer works at the school. She did not clarify whether the nursing director could be among the group.

"We're still looking at if there were any other intended victims as well. That's part of our ongoing investigation," Watson said Thursday. "We're keeping the investigation open for the possibility if the suspect was intending to harm any other administrators."