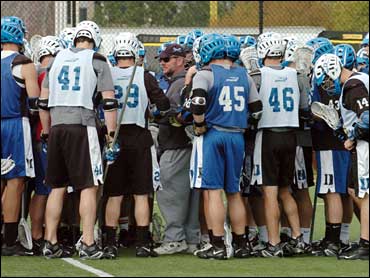 A woman who claims she was raped by members of Duke University's lacrosse team was described as "just passed-out drunk" by one of the first police officers to see her, according to a recording of radio traffic released Thursday.

Meanwhile, lawyers hired by the Duke lacrosse players charge Durham District Attorney Mike Nifrong, in the midst of a reelection campaign, is pushing this case more as a politician than a prosecutor, reports CBS News correspondent Trish Regan.

"There seems to be a rush to indictment in this case, one that I don't understand," said attorney Bill Thomas. "So many statements were issued to the public in a rush to get this case to the grand jury."

At a Democratic Party forum, Nifong's opponents were quick to suggest he's capitalizing on the politics behind allegations that three white Duke lacrosse players raped the woman.

They think Nifong's handling of the case reflects his desire to appeal to Durham's many black voters. The DA denies politics has played a role in the prosecution.

The conversation between the officer and a police dispatcher took place about 1:30 a.m. March 14, about five minutes after a grocery store security guard called 911 to report a woman in the parking lot who would not get out of someone else's car.

The officer gave the dispatcher the police code for an intoxicated person. When asked whether the woman needed medical help, the officer said: "She's breathing and appears to be fine. She's not in distress. She's just passed out drunk."

The black woman, a 27-year-old stripper and college student, told police she was raped and beaten by three white men around midnight at an off-campus party thrown by Duke's lacrosse team. The racially charged allegations have led Duke to cancel the highly ranked team's season and accept the resignation of its coach.

No charges have been filed, but Nifong has said he believes a crime was committed. Attorneys for the players have said DNA tests failed to connect any players to the alleged attack, and they have urged Nifong to drop his investigation.

Several of the defense attorneys say they expect the district attorney to ask a grand jury on Monday to issue charges in connection with allegations.

"Rest up on Sunday," attorney Kerry Sutton, who represents one of the team's captains, said Thursday.

There has been no official word, however, on whether Nifong intends to present the allegations Monday. His next opportunity would come two weeks later.