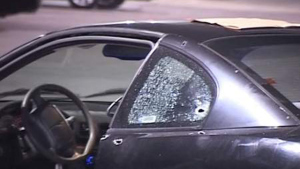 CHICAGO – A police officer responding to a shoplifting report at a Chicago-area Kohl’s department store open on Thanksgiving shot the driver of a car that was dragging a fellow officer, authorities said, reports CBS Chicago.

Two responding officers confronted Robert Russell, 51, as he tried to flee the scene of the alleged shoplifting by jumping in the passenger’s seat of a car, reports the station.

One of the officers reportedly caught up with the car on foot, and Russell allegedly closed the door on the officer as the driver, 52-year-old Charles Hinch, pulled away.

The station says the officer was dragged for a distance after his arm became stuck in the car.

Police say the backup officer ordered Hinch to stop, but he didn't. Thatofficer fired three shots, striking Hinch once in the shoulder.

Police arrested Hinch, Russell and another man, 28-year-old Gerald Chamberlain, who was inside the store.

The station reports charges against the three men are pending.

Hinch and the dragged officer were both taken to a hospital for treatment of non-life-threatening shoulder injuries.