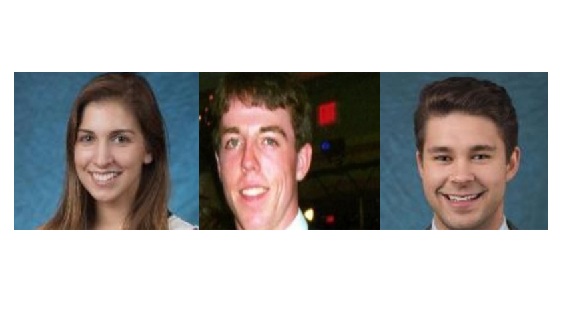 GENESEO, N.Y. -- A former student at a western New York college, distraught over a recent breakup, fatally stabbed his ex-girlfriend and another man before killing himself at an off-campus home, police said Monday.

Police believe the perpetrator to be 24-year-old Colin Kingston, of Geneseo, who was found dead in the home Sunday morning, near the State University of New York at Geneseo. Police say he had recently broken up with one of the victims, 21-year-old Kelsey Annese, after the two had dated for about three years. Police said Kingston killed Annese, a student at SUNY Geneseo and a captain on the women's basketball team there, and another student, Matthew Hutchinson.

Hutchinson, 24, of Vancouver, British Columbia, was a hockey player and a volunteer firefighter with the Geneseo Fire Department.

At a Monday press conference, Geneseo police spokesman Jeffrey Szczesniak said it's possible Hutchinson and Annese were asleep in a second-story bedroom of the home when Kingston fatally stabbed them. He said the nature of Hutchinson and Annese's relationship isn't clear.

Investigators didn't uncover any signs of a struggle at the scene, Szczesniak said. He said several other members of the women's basketball team lived there and were in a different part of the home when the killings happened. They told police they didn't hear anything unusual.

"We believe it was probably something that happened very quickly," Szczesniak said.

Police said Kingston bought the murder weapon, a large knife, and brought it with him to the home. He had recently indicated that he was upset about his breakup with Annese and had made suicidal comments, Szczesniak said, though he hadn't threatened to hurt anyone besides himself.

Police said Kingston called his father early Sunday, telling him that he had hurt Anessee and was thinking about taking his own life, and then hung up. The father called 911 at 6:21 a.m. Police quickly responded to the home, but by the time they arrived, all three were dead.

Kingston had used the same knife to kill himself, Szczesniak said.

Police believe Hutchinson and Anessee were killed sometime between 5:30 a.m. and the 6:21 a.m. phone call, because an officer who had been issuing parking tickets on the street before the slayings didn't find Kingston's car there before he left at 5:30.

Annesse wore the number 32 jersey because it is the same number her father wore when he played for Geneseo, according to a bio on the college's website.

Hutchinson took up hockey at age 9 and played defense for the Geneseo Knights, according to his athlete bio. He had volunteered for more than three years at the Geneseo Fire Department, making a point to take every training opportunity despite his packed schedule as a student athlete, said fire chief Andrew Chanler. He had received his EMT certification and had built strong relationships with other volunteers in the department, Chanler said.

"Matt did everything at the highest level," Chanler said. "He put effort into these things like nobody else."

Chanler said Hutchinson wanted to be a professional firefighter after college and had worked last summer as a forest firefighter back home in British Columbia.

The deaths were discovered two days before the start of Geneseo's spring semester. The college postponed the men's and women's basketball games scheduled for Tuesday and was making counselors available to students and faculty.

College president Denise Battles said many students were returning to the school after winter break and said it would be difficult for them to face the new semester with the tragedy on their minds.

'The Geneseo we know is a strong community," Battles said. "We will pull together in the aftermath of this tragedy."