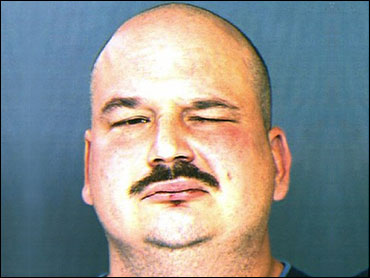 A father pulled a gun on a youth football coach because his son wasn't getting enough playing time, police said.

Wayne Derkotch, 40, was arguing with the coach Sunday morning during a game of 5-7-year-olds in northeast Philadelphia, and it turned into a fight between the two men.

Derkotch was losing, and then pulled out the .357 Magnum, police said.

Referee Shawn Henwood shouted for the players to "Come with me!" and they did, following him from the 50-yard line to the far side of the field, then crouching. Screaming mothers rushed toward them, reports the Philadelphia Inquirer.

No shots were fired and no one required medical treatment, authorities said.

"It was all because his son wasn't playing enough," said Capt. John McGinnis. "It's a very bizarre case."

Derkotch was charged with aggravated assault, simple assault and reckless endangerment. He did not immediately return a telephone message left at his home Monday.

The referee also was arrested after he threw a punch at Derkotch's brother. Henwood was charged with assault and released on his own recognizance.

Henwood said he tried to block the path of Derkotch's truck to write down his license plate number but that Derkotch's brother tried to get him out of the way.

"He came at my throat, and I struck him," Henwood said. "It was so unreal. I guess I snapped."

Police said Henwood had to be arrested after throwing the punch in front of officers, though McGinnis said, "He was being the good guy."

The brother was not charged.

Henwood said Derkotch apologized to him after they both had been taken into custody.

"I said, 'You don't have to apologize to me. I didn't have kids on the field,'" Henwood said.

Henwood said he worried about the children's mental state after seeing the fight.

"I cried thinking about the kids," Henwood said. "I can see snapshots of their faces in my mind. ... They were dazed. Their eyes were wide open. They saw what was going on. Are they going to want to play ever again?"