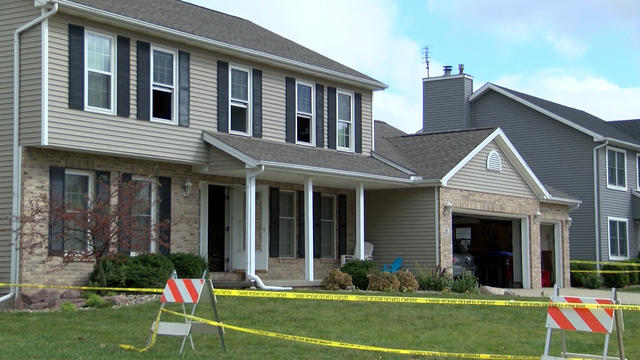 Police on Wednesday identified the man as Eric Ringenberg. Officials identified the two boys only by their initials, 2-year-old CR and infant brother, RR.

The Pantagraph in Bloomington reports the mother, 32-year-old Pamela Ringenberg, was hospitalized for smoke inhalation after Tuesday morning's fire. Autopsies showed the children died from strangulation via ligature.

Police say home surveillance cameras show Eric Ringenberg putting the cellphones in a kitchen cabinet, then intentionally starting a fire in the basement after the children were killed.

The father then hanged himself.

The two children and the father were all found dead in the home's basement, reports CBS affiliate WMBD.

The cameras also show Pamela Ringenberg awaking to the sound of the smoke alarm and frantically searching for her family and cellphone to call for help. She was unable to find them.

She eventually fled the home and sought help from neighbors.

The video shows Eric Ringenberg acted alone in killing the children and starting the fire, the station reports.