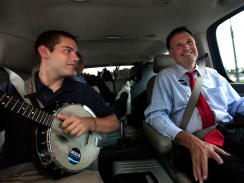 LANHAM, Md. -- Police say they are now looking at the death of Austin "Gus" Deeds and the stabbing of his father, Va. State Senator Creigh Deeds, as a possible attempted murder-suicide.

Virginia State Police spokesperson Corinne Geller told reporters the investigation was ongoing but that no other suspects were being sought in the incident, which occurred Tuesday morning at State Sen. Deeds' Millboro, Va., home.Geller said Tuesday that Deeds, 55, is in critical condition after being stabbed  "multiple times about the head and neck."

Police responded to Deeds' home around 7:25 a.m. Tuesday morning and found Deeds with stab wounds and his son, known as Gus, with a gunshot wound. Geller said police were unable to save Gus, 24, who died at the scene. Deeds was airlifted to the University of Virginia Medical Center.

Geller said the motive and sequence of events are unclear, but that they are not looking for any suspects at this point.

Deeds was formerly a Bath County prosecutor and was elected to the state Senate in 2001, according to the Associated Press. He also ran unsuccessfully for attorney general in 2005 and for governor in 2009.

Gus Deeds enrolled at the College of William & Mary in 2007 and attended the school on and off, but had withdrawn a month before his death, according to a statement released by the college.