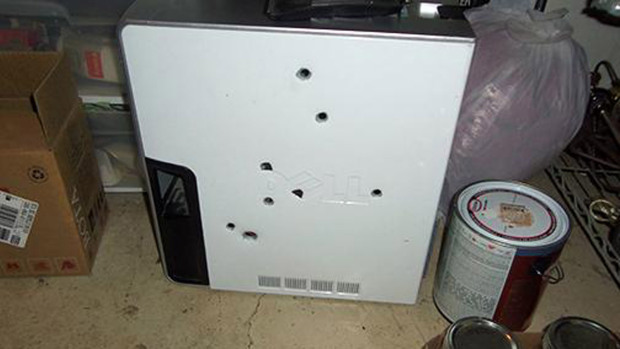 COLORADO SPRINGS -- It's probably not what comes to mind when you think about computer crime.

Police say a Colorado Springs man "fed up" with his computer shot it eight times, according to CBS Denver.

Lucas Hinch, 37, told police he had been "fighting" with the machine for the last several months. Then, just before 7 p.m. Monday, he reportedly took the computer into a back alley and fired at it with a handgun.

Yes, a back alley.

There were no injuries -- other than the computer, that is, which did not survive.

In a police statement entitled "Man Kills His Computer," an officer wrote that the shots "effectively disabled" the device, reports Reuters.

Hinch reportedly didn't realize he was breaking the law when he performed his own version of a scene from the movie "Office Space," by going ballistic on the machine, reports the Colorado Springs Gazette.

Officers who responded to a call of shots fired gave Hinch a citation for discharging a firearm within city limits, reports CBS Denver.

A judge will decide what penalty the citation carries, according to Reuters.