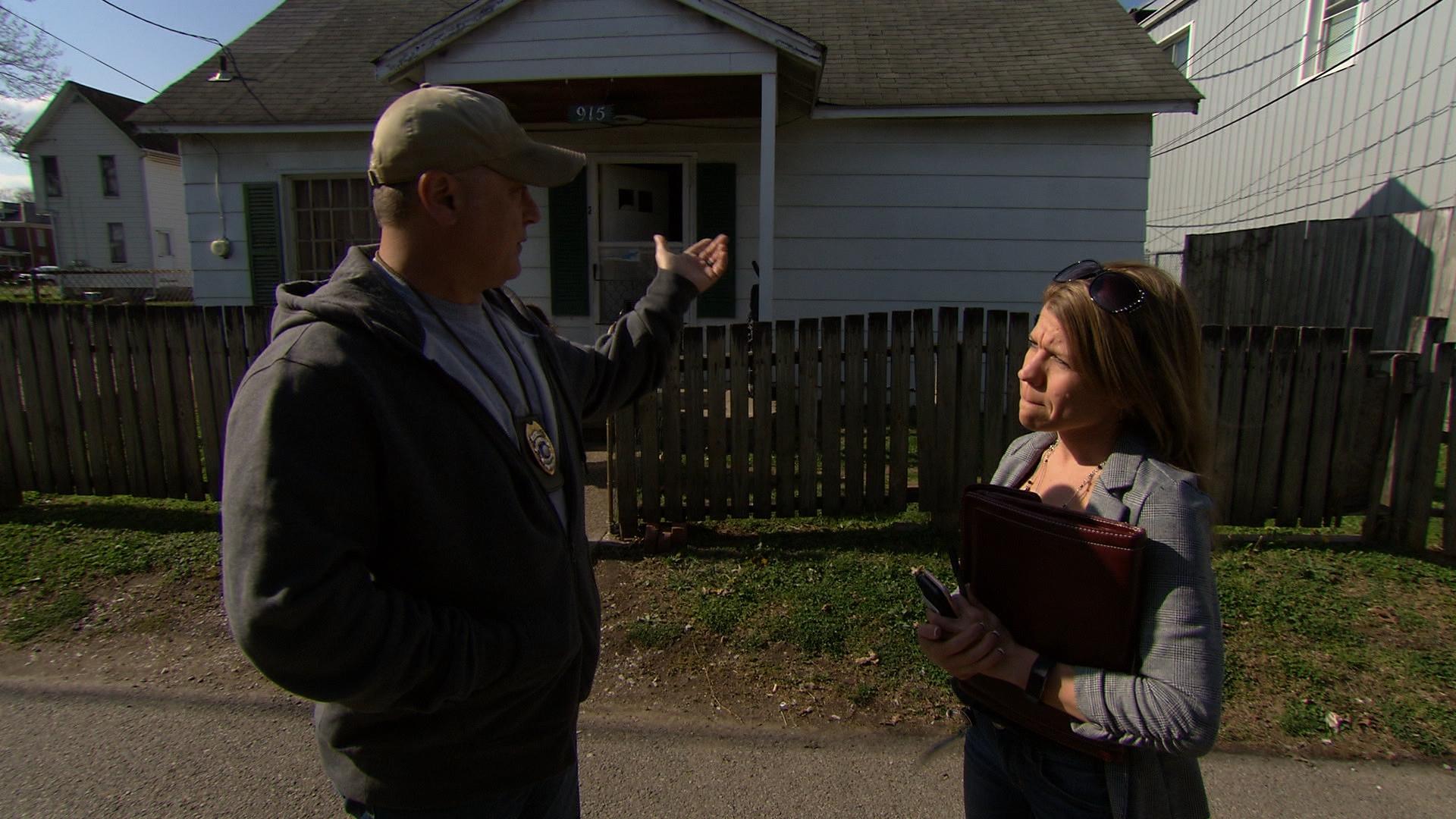 Nestled in the Appalachian Mountains, along the eastern borders of Kentucky and Ohio, sits Huntington, West Virginia, a place so consumed by the opioid epidemic it has been crowned "the Overdose Capital of America." At its worst, people here were dying from drug abuse at a rate eight times the national average.

The small city of 50,000 fell victim to a fading economy and birth of despair. The depths of that despair unfolded in the summer of 2016. A mass overdose pushed a desperate city to try something never done before. Their single mission: saving Huntington.

The calls started coming in at 3:21 on a warm August afternoon, people were collapsing across the city.

Rocky Johnson, a 28-year veteran of the police force and head of the drug unit, was on call that day.

Rocky Johnson: I'm driving up Eighth Avenue and the Chief of Police calls me and he goes, "Hey have you heard the radio? We've got 24 people and counting that have overdosed."

Rocky Johnson: It just went crazy, the police department, EMS, the fire department because they're trying to bring people back to life.

In just four hours, 26 people had overdosed on a batch of fentanyl laced-heroin.

Hank Dial: I think everybody became aware that things had changed that day.

When Hank Dial stepped in as police chief 17 months later, his force was overwhelmed.

Huntington, once a thriving industrial hub, had been crippled by years of job loss, rising crime and 1,600 overdoses the previous year.

Chief Dial took a drastic step. He asked the feds to send help, even requesting the National Guard.

Hank Dial: Absolutely. We treated this like an emergency. I'll call anybody that'll help.

A small army working block by block, rounding up addicts, arresting dealers, shutting down drug dens that had taken root throughout the city's residential neighborhoods.

Inside one raid, there were meth pipes on a baby's changing table and a handwritten note telling addicts not to "use dope in the bathroom" because that's where "the baby will be taking his bath."

Sharyn Alfonsi: When you go out on these raids and you look around on the floor and there's diapers, bottles, kids toys. That stuff takes your breath away.

Rocky Johnson: Yeah it does. It's always had an effect on me but it really changed about six years ago when I had a daughter. And man, that's, that's not good.

Sharyn Alfonsi: Did you think this is not winnable?

Rocky Johnson: Yeah, Yeah, I tell you what, we pounded it day in, day out, almost 24 hours a day, me and my guys. And you'd think, oh good, we can catch our breath for the next couple days. No. The next day, they're right back at it. Somebody just filled the spot. And that is when I started to think as hard as we're pressing and as hard as we're pounding away at this problem, we're not making any difference.

Sharyn Alfonsi: You guys realized you couldn't just arrest people. You had to do more.

Hank Dial: Our side is to disrupt the supply. But what was invariably left behind was a group of people – who were the buyers, who were still coming to the store looking for that.

Huntington Police realized to break the cycle, they had to curb demand. That meant getting addicts into treatment.

So Chief Dial took an unusual step. He hired Krishawna Harless, a mental health addiction specialist. She was dispatched to the front lines to work with the drug unit.

Sharyn Alfonsi: What did they tell you about what they were thinking?

Krishawna Harless: Basically, our city was in a crisis. And their officers were exhausted. And they knew that they were missing the ball, that they couldn't arrest their way out of it. And they weren't sure what to do. But this was somethin' they wanted to try.

Sharyn Alfonsi: And so you were kind of making up this job as you went along at first?

Krishawna Harless: We all were, yeah.

Rocky Johnson: We'll send a girl down here to talk to you – she's not a cop, she's a civilian. She specializes in mental health services, especially rehab. At least hear what she's got to say and take her card. How 'bout that?

Krishawna Harless: Would you be interested in talking about detox today and getting into a program?

ADDICT: What about me and him going in together? Is that not allowed?

Krishawna Harless: Typically that's not something that we encourage -

Krishawna Harless: This was a whole process. Like, first, I had to find my footing at the police department. Then I had to get in with the drug unit, which was Rocky. And that was not a small task.

Sharyn Alfonsi: Tell me the first time someone brought up the idea of having this kind of softer edge to the efforts to curb drugs here? How did you react?

Rocky Johnson: I'll be honest, I was a no. I don't want to hear this--

Sharyn Alfonsi: Because you thought what? You thought this was soft?

Rocky Johnson: Same old thing. Here we go. It's the same old thing. A bunch of people are gonna talk. And nothings gonna get done.

Krishawna Harless: I had to get out on the street and I had to really meet with people all the time and be there all the time to the point where even Rocky came back to me and said, 'People talk to me now that didn't used to talk to me because they see me different because I have you with me.'

Rocky Johnson: We were handing the addicts off to her so she could do her job. And that freed us up to do ours which was target the drug dealer.

Standing just under five feet tall, Harless is a huge presence on the streets where she spends most of her working hours.

The rest of the time, she's finding open beds in rehab and advocating for users in court.

She gives all the addicts she meets her cell phone number.

They call at all hours, and on holidays, and she says she always answers.

Krishawna Harless: Hey, can we talk for a second?

Krishawna Harless: I'm going to give you my information first. My name is Krishawna. Have you ever had treatment before?

Krishawna Harless: No? Are you interested in getting some treatment?

Krishawna Harless: Well I would like to work with you. Help you figure out what would be best for you and get you in somewhere.

Krishawna Harless: There's a lot of individuals that are left in the aftermath that just need help and that's where I get to go in. And as a social worker, that's huge.  Because there is no other job that I could have that would afford me that opportunity to meet somebody in that position.

Sharyn Alfonsi: In that moment.

Krishawna Harless: In that moment and, and the look on their face. They just look like they just can't believe it.

Rocky Johnson: So I've been at this for 27, almost 28 years. And I've seen programs come and programs go. Most were failures. Most did not fix the problem. Most moved the problem around. Okay. Because I never had that option before. Okay, I never had an option of rehab and recovery, had a lot of talk, a lot of noise. But nobody ever really fulfilled that promise until now.

We spoke to dozens of police departments in areas hardest hit by the drug epidemic. But none has a program like Huntington's, putting a social worker like harless on the front lines.

Rocky Johnson: She has an incredible amount of patience. She will sit there and talk and she's not pushy.  She's not shoving something down somebody's throat. She just stands there. And she's very calm and collected and very passionate about what she does.

A passion and patience, born out of pain. Three years ago, she divorced her husband. Once a decorated solider, he'd become a drug addict.

Krishawna Harless: And you know, I would find myself you know, out on my own, trying to hunt him down, because I was worried that he was dead and finding him like, you know, in a crack house. I really get it on a personal level and know what it does to families. I know what it does to the person. And I think of that all the time. Because if somebody had said, "Can I help you?" and they really meant it, and they helped us navigate the system, maybe things would be different.

Krishawna Harless says her husband never accepted her help. Most addicts she meets, do. Today, she's working with over 300 users, 73% of them have gone to rehab.

Krishawna Harless: I remember going out looking for you.

RECOVERING ADDICT: Yeah, that's when I was on the streets, being a knucklehead.

Krishawna Harless: Well it's good to see you, where you're at now.

Krishawna Harless: I am too.

Sharyn Alfonsi: Are there enough programs and rehabilitation facilities for all the addicts that you come in contact with now?

Krishawna Harless: It can be tricky. But I think that's one of the things that makes this program unique is that these individuals who are already suffering from addiction, they are not trying to navigate the system. They get to work with me. And I can help them navigate the system.

Krishawna Harless: We don't ever turn somebody away. There's never a time that somebody says I need help and we're like, well you'll have to wait a couple of months.

Sharyn Alfonsi: And why is that so important? What can happen in a day, a week, a month?

Krishawna Harless: Well, they might not be here anymore.

We saw that during our short time with Harless.

We met 33-year-old Norman Stanley, a year out of rehab and working construction. He told us he was clean, and Krishawna Harless was a big reason why.

Krishawna talking to Norman: It's really good to be standing here with you and know that you're doing good.

Harless says she won't allow herself to be defeated by those hard days.

Breanna Dement started using drugs when she was a teenager.

This was how she looked when she was first arrested at age 18 for DUI. This was her second arrest – here 26-years-old, just 90 pounds.

This past January, Krishawna Harless got her out of jail and into treatment.

Breanna Dement: I'm glad I got to come here because of the opportunities that they offer you.

Krishawna Harless: And you're in a long term recovery program which you need.

Breanna Dement: Yeah, I definitely do. I mean everybody's always told me that and I was like, "No. I can do this."

Krishawna Harless: You were out there for a long time.

Breanna Dement: But I needed it.

Krishawna Harless: So you're doing good.

Krishawna Harless: Ready to move to the next phase?

Rocky Johnson: A lot of those faces and a lot of the people that we dealt with over, over and over again, they're not here anymore. They're off to rehab or straightened their life up and moved on.

The program is part of a larger effort across the city and state to tighten controls on opioids and stiffen penalties for drug crimes.

Huntington's new approach is just over two years old, so questions linger about its long term impact, but  the immediate results are restoring a bit of hope here.

Overdoses have dropped more than 40%.

Krishawna Harless: We have to figure this out. Because it doesn't discriminate. And it's not like-- people always say, like, "Why do you wanna work with those people?" And I'm like, "What are those people? People? Because I mean it can be anybody. It really can."